‘My wife is irresponsible, promiscuous, attempted to stab me, ’ 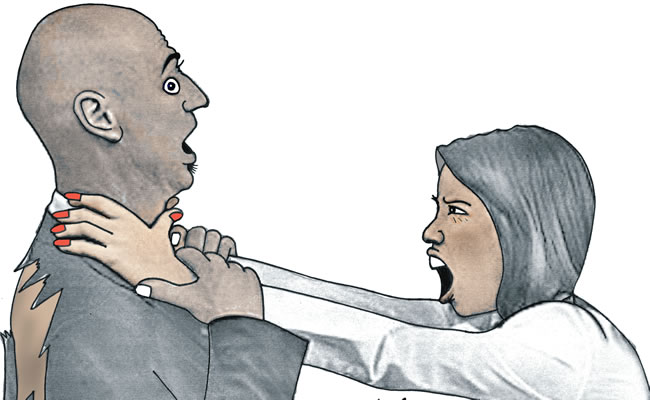 Sarafadeen in his suit alleged that his wife was irresponsible, promiscuous, readily flouted his orders and violent.

The plaintiff stated that he had brought divorce suit against her thrice, but that he was prevailed upon to withdraw the case each time he came to court.

According to him, he returned to court the fourth time because his wife was obviously not ready to change, adding that he was fed up with her.

Sarafadeen pleaded with the court, if her prayer was answered, to grant him custody of their three children because his wife did not have time for them.

He further requested that the court rule that she moved away from the neighbourhood where they were presently living.

Bose denied all the allegations when they were read to her.

The defendant also refused that he had custody of their three children.

Sarafadeen said, “I met my wife in 2007. My family met with hers and a small ceremony was held to formalise our marriage.

“Bose trained as a chemist and I established her in the business.

“I rented a shop for her and filled up her shop with drugs without the contribution of her parents.

“We were living together peacefully until we moved to our house and Bose started mingling with our tenants who are married men.

“I sometimes return home early and will meet my wife playing ludo game with our male tenants. I showed my dislike at this, but she refused to change.

“I reported her to her mother, but unfortunately she saw nothing bad in it. She took sides with her daughter.

“At another time I saw her playing cards with some young guys in the compound. I again reported her to her mother who advised that I exercise patience.

“I erected a shop for my wife in front of our house and equipped it. I filled it with drugs and also bought her a freezer for the sales of soft drinks, but she failed to make any good out of these.

“Bose hardly stays in her shop. She loafs around the nieghbourhood mingling with women who lack virtue.

“On an occasion, I gave her N5,000 and at another time N10, 000 to buy the needed things in the home, but she failed to do this and till date couldn’t account for the money.

“I got fed up with my wife as a result of her misbehaviour and we fought.

“Bose, angry, lifted a lamp that was lit from the floor and flung it at me. The kerosene in the lantern splashed all over me. I narrowly escaped being burnt.

“I ordered her to leave my home.

“I insisted on divorce and came to court, but her parents and members of her extended family prevailed on me to change my mind and I did.

“I came to court two times after this because of her atrocities, but always dropped the case after much plea from her family members.

“This is the fourth time I would drag my wife to court and I am bent on divorce.

“At another time she poured hot water on me because I insisted she cooked with gas and not wood. Her plan was to give our tenants a wrong impression about me. They would think I was maltreating and labouring her when they saw her cooking with wood.

“Not satisfied, she removed one of the sticks she was cooking with from the fire and threw it at me. I dodged it but fell to the ground.

“My lord, my wife again attempted to stab me with a knife one morning. I would have been a dead man by now, but for the timely intervention of our tenants.

“Bose is unfaithful to me. My ears are filled with stories of her escapades with her lovers.

“She came to my work place to threaten me because I came to court.

“My lord, Bose has pushed me to the wall. I am fed up with her and don’t want anything to do with her again.

“I entreat this honourable court to rule that we go our different ways and order her to move out of our neighbourhood because I don’t wish to set my eyes on her again.

“I further pray for the custody of our three children.

“I appeal to the court to restrain her from coming to harass, threaten or fight me in my place of abode or work place,” he concluded.

The court president, Mrs S.M Akintayo, after he had listened to his evidence, adjourned the case till September 5 for further hearing.

Problems with catarrh and blocked nose

Difference between bacteria and viruses