My husband does all-night love-making, demands for weird positions —Wife

•She drinks beer; I found condoms in her bag, caught her with another man —Husband 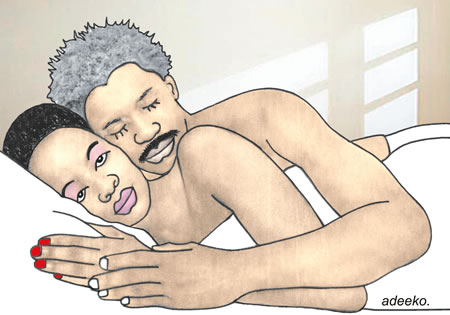 A 19-year-old woman in Ndola Zambia, has run away from her matrimonial home because of her husband’s excessive sexual drive which goes on throughout the night and his demands for weird positions.

The woman of Mushili Township narrated before a Kabushi local court that she ran away from her husband’s house because of too much love making which caused bruises as he went for many rounds in the night.

According to The Zambia Observer, Yoram Lungu, 32, sued his wife Charity Lungu for divorce due to marital disputes.

Charity told the court that her husband would make love to her, demand for weird positions even when she was on her periods and would not give her a break.

She complained that she could not stand his excessive sexual drive and that he would make love to her on a daily basis, hence she bolted from home.

The case was before senior presiding magistrate, Agnes Muswema, sitting with Mildred Namwizye and Evelyn Nalwizya.

“My husband cannot just do it once but many rounds, he demands for weird positions and when I try to talk to him, he tells me that this is what marriage is all about and needed to endure,” Ms Lungu said.

“I get tired and bruised expecially after weird positions. I am tired because of too much sex, but I am ready to go back to him if he reduced on sex and his demands. When I complained to him at some point he told me that if I can eat every day then I was able to have sex every day. He can’t relax all he wants is sex throughout the night,” she lamented.

But Mr Lungu in his testimony, said he was fed up because his wife displayed a bad attitude towards him when she got a job and stopped respecting him.

He told the court that when he was not doing well his wife decided to get a job in town but later discovered that it was just a way of staying away from home so that she could have enough time with her boyfriend.

He said his wife would leave home to drink beer with her sisters and at some point he had found condoms in her hand bag.

“One day I came home early from work and found my wife with a man and only told me that the young man was her friend. I have tried to talk to my wife but she doesn’t listen I just want divorce,” he said.

The court granted the couple divorce and ordered the man to compensate his wife K5, 000 with a first payment of K500 followed by monthly installments of K250.

After a breakup, would you return an expensive gift your ex gave you?