My disciplinarian parents shaped my life —Olofin of Ilishan-Remo 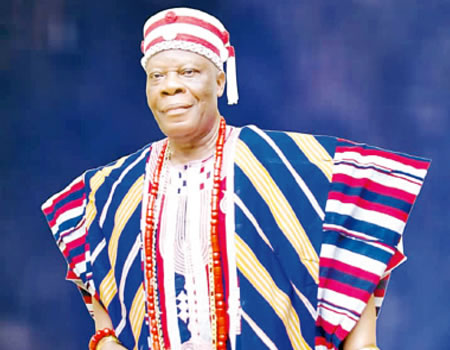 Ilishan-Remo is the hosting community to the Seventh-day Adventist Babcock University, an institution making remarkable impact among private universities in Nigeria. Apparently due to the presence of the university in the town, Ilishan-Remo has since been opened up to people of diverse background-students, parents, lecturers, administrators and visitor. Accordingly, the socio-economic life of the town has been significantly raised as expected in a university community. In an interview with TUNDE BUSARI, the Olofin of Ilishan- Remo, Ogun State, Oba Arimasakin Olufemi Shonuga, who is celebrating 80 years birthday, the traditional ruler attributes the state of the town to the grace of God and determination of the town to move forward from its past. Later in the year, Oba Shonuga will clock years on the throne. He, therefore, speaks on his journey so far. Excerpts

How has your early life been ?

You would agree with me that there is no smooth road to success but there is no regret so far in my journey of life. I was brought up in a disciplined home. I am proud to say that my parents are disciplinarians. Although it is not usually easy passing through disciplinarian parents who don’t spare the rod. But in the end, when one grows up, one grows to appreciate that experience, which I consider privileged because many parents prefer to spare the rod, perhaps because of what they went through before they could have the children. But ultimately, spoilt children don’t always end it well because they are not exposed to the other side of life.

Which school did you attend?

I attended the Local Authority Primary School in Ilishan here, where I also taught before I proceeded to the Teachers’ Training College in Lagos where I had my ‘O’ and ‘A’ levels. I taught for some years in Nigeria before traveling out of the country in search of greener pastures. I enrolled for GCSE subjects and passed in flying colours. I also attended the University of London. I had my Masters in Law at the City of London Poly. I came home and then went to Law School, after which I practised for some years. Things were not so rosy, and I went back to England.

How has your reign been since a decade you ascended to the throne of your fore fathers?

Without being immodest, I met Ilishan in a tumult; there was a rivalry between my predecessor and late Amballi Balogun, who was contesting for the position of Balogun. We had trouble from the market women, hooligans, etc. The heat is subsiding now as most of the originators of the problem have died. One can say that those incidents formed challenges one faced in the past 10 years on the throne. But that we survived the challenge till date means we should give glory to God because without Him nothing could have been done over those challenges.

You are celebrating your 80th birthday and 10th year coronation, which means you became the Olofin at the age of 70. Was there any opposition as regards your age, considering the fact that we have now kings who are 40- 50 years of age?

No, there were no problems. I didn’t have any opposition. I was chosen. God had hands in my succession to this throne. How I emerged till my coronation speaks volume that only God has that prerogative to make one what He likes. I am grateful that my emergence followed easy path unlike in other places where they experience interregnum and what Historians call succession dispute.

What are your wishes as you turn 80?

I wish to rebuild Ilishan; complete the palace, whose construction started in my reign, the police post too. I wish to resolve the trouble at the market and also create a better atmosphere for the inhabitants.

As you clock 80 years, do you have any regret? Do you wish there were things you did or did not do?

I have no regret. I came in at the right time and the right age. My coming in at the time is a blessing in disguise. The other four ruling houses didn’t want a king from my ruling house.

What are the names of the ruling houses?

What relationship do you have with other kings in Remo?

I have a very cordial relationship with them. I am a member of the Ogun State Council of Obas. We are working together to develop Remo. Development of Remo is a collective duty of all of us. That is why we are mobilizing our sons and daughters to return home and make their contributions towards that goal. We cannot

What developments have come to Remo since you ascended to the throne?

In my reign as king, we built a palace, a police post and also formed the Remo grows association. However, government’s assistance has been lacking. We have not felt the influence of neither the federal nor state government. We need the assistance of the government to help reduce unemployment.

What other development do you wish for Ilishan?

We would like completion of the Lagos-Ibadan expressway, and the Ilishan-Ago-Iwoye road as well as it would foster rural inter relations. We would also want more institutions, government owned preferably. Our youths should be encouraged to go through the provision of skill empowerment programmes.

What has been the contribution of prominent citizens who are indigences of Ilishan Remo?

They have also been waiting for the government to take a step. We just have to keep hoping. We need assistance of the federal and state governments. We need to have a feel of the dividends of democracy. A lot of things need to be addressed; the school that was abandoned under construction, the schools are under staffed. We have tried to reach out to the government to seek their help but nothing has come forth. We want to have good roads, a reduction in the rate of unemployment. An improvement in power supply and all.

Save us from Fiditi stream that takes lives, properties —Ikire communities cry out