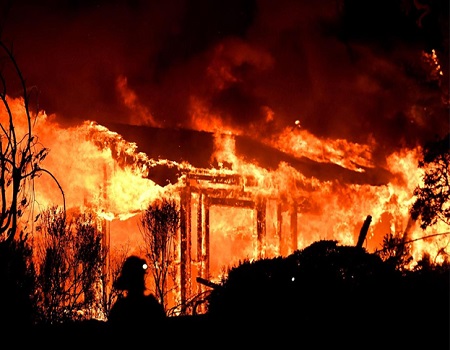 Four children of the same parents and their mother were, on Wednesday night, burnt to death in an inferno that consumed their apartment at Tanke community of the Ilorin metropolis, Kwara State.

Tribune Online gathered that the residence is situated at Ifesowapo community, behind “F” Division Police Station, Tanke in Ilorin.

It was also gathered that the fire incident was caused by a light from a candle in one of the rooms, which caught flames and spread into other rooms burning the mother and her four kids into ashes while sleeping.

It is recalled that residents of Tanke, Fate, and Oke-Odo areas, among other places in the Ilorin metropolis had been thrown in total darkness for almost one week following the rainstorms that damaged electric poles in the areas.

It was said that the husband and father of the deceased was out to get some things when the incident happened.

Sources close to the family told journalists that the only child that survived the inferno was said to have been receiving medical attention at the University of Ilorin Teaching Hospital (UITH), Ilorin.

ALSO READ: Zamfara no-fly zone: we are ready to support any FG policy that would bring peace

The report also had it that men of the state fire service swung into action when they got the distress call on the incident, adding that the damage had already been done before their arrival, allegedly due to the bad road of the area.

Speaking on the incident, the chairman of the Ifesowapo community, Mr Awodun Yinka, said that members of the community heard the agonising noise from a room-and-parlour self-contained apartment and they quickly rushed down, adding that they were unable to rescue the children.

He said that the cause of the incident was the light from the candle, which reportedly spread across the room while the family was sleeping adding that, “the inferno was not caused by a power surge.”

The landlord of the house, Mr Ibrahim Gana, who was injured on his hand while rescuing the only child in the inferno, appealed to the state government to assist the family, especially the only survivor, who he said is currently receiving treatment at the UITH.

Zamfara no-fly zone: We are ready to support any FG policy that would bring peace ― Commissioner