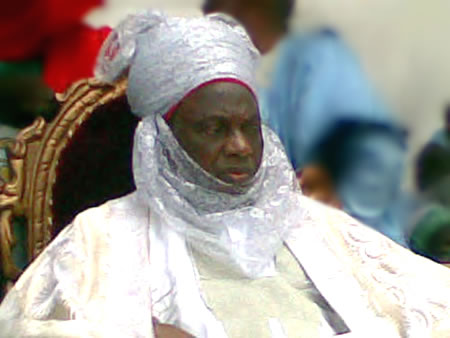 The Ohinoyi of Ebiraland, Alhaji Ado Ibrahim, has admonished Christians brothers and sister to maintain peace and unity as they celebrate the birth of Jesus Christ.

The monarch made the called on Saturday at his palace in Okene, Kogi State while receiving food items worth over N1 million donated by a Non-Governmental Organisation ‘Waves of Success Foundation’ for onward distribution to the less privileged in the area.

He also called on individual, corporate organisations to always extend hands of fellowship to the less privilege in order to complement government effort to alleviate poverty and make the society a place of living.

While admonishing individuals and corporation organisations in Kogi State and the country at large to emulate the gesture of Wave of Success Foundation, the monarch said rendering assistance to the less privileged in the society reduces the adverse effect of poverty in the society that often time gave birth to all forms of criminality.

“It is my fervent advice to numerous well to do individuals and corporate organisations to remember the poor in the society because what this Non-Governmental Organisation has done today will go a long way in alleviating the suffering and the poverty that exist among the less privileged in this community.

“I am also using this medium to admonish our Christians brothers and sister to maintain peace and unity as they celebrate the birth of Jesus Christ.”

Earlier, the Executive Director of the Foundation, Mr John Ochaja, said that the activities of the NGO were borne out of human necessity, saying its aim was to help underprivileged and struggling people achieve their dreams and aspirations in life.

Ochaja noted that in their own little way they were able to reach out to the less privilege in Internally Displace Person’s (IDP) camps in Maiduguri and Abuja as well as putting a smile on the face of the poor in Kogi State and its environs.

“We go out periodically during the festive period to render help to the less privilege who does not have any hope of celebrating the festival.

“In Okene today we are able to donate 21 cartons of vegetable oil and 250 bags of rice packed in 5kg to be distributed to the poor in the community and we are resolute not to relent in our effort to do more for the people,” he said.

Also speaking a volunteer of the Foundation, Mr Paul Adubazi, said in the last three years the NGO has been rendering assistance to the needy ones in the society, saying no retreat no surrender in their effort to alleviate poverty in Kogi State.