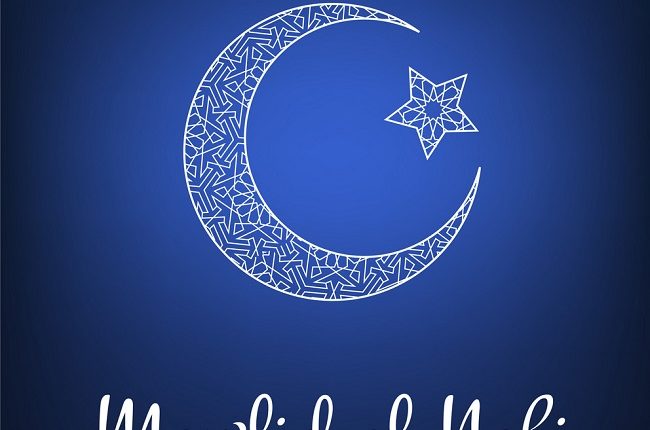 MAULIDU’N-NABIYY is the anniversary of Prophet Muhammad’s (SAW) birthday. The Prophet (SAW) was the son of Abdullah Ibn Abdu’l-Muttalib and his mother was Aminah. He was born in Makkah during the Era of the Elephants.

In the accounts of authentic writers, the Prophet was born on 12th Rabi’ al-Awwal 570 C.E. His grandfather, Abdu’l-Muttalib, was the custodian of the Ka’bah. He belonged to the family of Hashim which was the noblest tribe of the Quraish section of the Arabian race and direct descendant of Prophet Ismail (AS), who was the first son of Prophet Ibrahim (AS).

The 12th day of the month of Rabi’ al-Awwal is celebrated annually for the purpose of showcasing the values and virtues of Muhammad (the exalted). Halimah of the Banu Sa’d nursed and suckled Prophet Muhammad (SAW) for two years.

Upon his birth and during his childhood, some miracles happened as stated in the commentary of Al-Baizawi, Al-Kamalan and Husain. Suratu’l-Sadr (chp 94 vs 1-3) refers to the enlightenment of the Prophet’s heart as a sort of supernatural issue and a miracle, wherein the Prophet (SAW) was cleansed of the stains of original sin by Angel Jibril.

In his sixth year, the Prophet (SAW) was taken by his mother to Madinah and while returning, she died and was buried at Al-Abwa. He was taken to Makkah by Umm Aiman. His grandfather was the guardian for two years. In 578 C.E., Abdu’l-Muttalib died at the age of 82 years, thereafter his paternal uncle, Abu Talib, took care of the Prophet (SAW).

As a result of his excellent character, he was called Al-Amin (the faithful). In his 25th year and through his uncle Abu Talib, he was able to enter the service of a widow, Khadijah.

Khadagah married Muhammad (SAW) for his sincerity and honesty. They had an awesome and fruitful marriage with two sons and four daughters. At age 33, he started withdrawing from public view for prayers and concentration at the cave of Hira in Makkah. Therein, by his 40th year (610 C.E.), Angel Jibril appeared to him and Suratu’l-Alaq (chapter 96 verses 1-5) was revealed to the Prophet (SAW). His wife Khadijah was the first person to accept the prophethood of Muhammad (SAW).

As Islam grew, the Prophet (SAW) was confronted with a lot of persecutions that led to his Hijrah (migration) to Madinah in 622 C.E.

Other revelations through Angel Jibril were delivered to Muhammad (SAW) and the last revelation came down in Madinah, 81 days after the Hajjatu’l-wada, (chpater 2 verse 281) on 632 C.E .(13th Rabi’ al-Awwal 12 A.H.)

Muhammad (SAW) is not the founder of a new religion but of a new covenant. He is the last and most influential of Almighty Allah’s Prophets. It is imperative to note that the virtues and values of the Prophet (SAW) are highlighted in Suratul Muhammad (chapter 47 verse 2).

Sheikh Nojimudeen, an author, is the Chief Imam of Challenge Central Mosque, Ibadan.

As Nigeria celebrates its 60th Independence Anniversary, Most Reverend Emmanuel Adetoyese Badejo, the Bishop, Catholic Diocese of Oyo in his message on the occasion…Maulidu’n Nabiyy  Maulidu’n Nabiyy