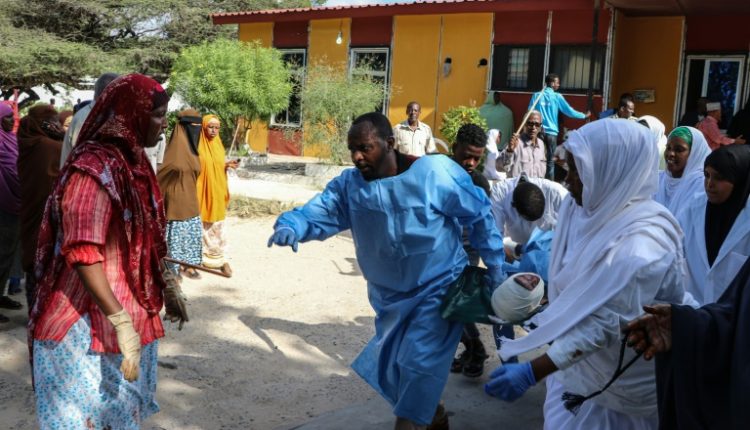 A massive car bomb exploded in a busy area of Mogadishu on Saturday, leaving at least 79 people dead and scores injured in Somalia’s deadliest attack in two years.

At least 16 of those killed were students from the capital’s private Banadir University, who had been traveling on a bus when the car bomb detonated at a busy intersection southwest of the Somali capital.

Scores of wounded were carried on stretchers from the site, where the force of the explosion left the charred and twisted remains of vehicles. Two Turkish nationals were also killed, Turkey’s Foreign Minister Mevlut Cavusoglu said on Twitter.

The area was often clogged with traffic due to a security checkpoint and a tax office collecting fees from buses and trucks passing through.

The attack has not been claimed, however, Mogadishu is regularly hit by car bombings and attacks waged by Al-Shabaab Islamist militants allied to Al-Qaeda.

Somali police chief Abdi Hassan Mohamed told reporters that the “devastating” circumstances had made it hard to establish the number of casualties.

“Now we can elaborate on the death toll which stands 79 at the moment and the wounded are 100 plus. There can be one or two more people who may be dead” due to the high numbers of those injured, he said.

A student of Banadir University, who asked not to be named, told AFP he had rushed to the hospital after hearing of the blast, as his sister had been on one of two buses headed to the university. Hers, however, made it through before the explosion.

“What happened today was horrible. I have counted the dead bodies of 16 male and female students some of them had parts of their bodies severed,” the student told AFP.

“The minibus carried 17 students and only one of them who had gotten off the bus before the blast to get a pass receipt from the tax collection point had survived,” he added.

Banadir University said they would shut for five days after the disaster.

“This was a black day, it was a day when parents who have sent their children to learn were sent back the dead bodies of their children,” University chairman Mohamed Mohamud Hassan said in an audio message released on Saturday evening.

“This enemy works to implement the destructive will of international terrorism, they have never done anything positive for this our country, they have not constructed a road, never built hospitals and not education centres as well,” he said.

“All they do is destruction and killing and the Somali public are well informed about this.”

Turkey’s defence ministry wrote on Twitter it had sent a military plane “loaded with emergency aid equipment… in order to provide emergency aid to our Somalian brothers injured in the despicable terror attack in Somalia.”

United Nations chief Antonio Guterres condemned the attack and said in a statement “that the perpetrators of this horrendous crime must be brought to justice.”

Sakariye Abdukadir, who was near the area when the car bomb detonated, said the blast “destroyed several of my car windows.”

“All I could see was scattered dead bodies… and some of them burned beyond recognition.”

Prime Minister Hassan Ali Khiere appointed an emergency committee to work on providing help to those who have been wounded in the blast.

“We will seek medical assistance outside the country for those whose health situation cannot be dealt with inside the country, the prime minister told Radio Mogadishu.

Witness Muhibo Ahmed said the attack was a “devastating incident because there were many people including students in buses who were passing by the area when the blast occurred.”

Mogadishu is regularly hit by attacks by al-Shabaab, which has fought for more than a decade to topple the Somali government.

The militant group emerged from the Islamic Courts Union that once controlled central and southern Somalia and is variously estimated to number between 5,000 and 9,000 men.

In 2010, the Shabaab declared its allegiance to Al-Qaeda.

The following year, its fighters fled positions they once held in the capital Mogadishu, and have since lost many strongholds.

But they retain control of large rural swathes of the country and continue to wage a guerrilla war against the authorities, managing to inflict bloody death tolls in attacks at home and abroad.

Since 2015, there have been 13 attacks in Somalia with death tolls above 20. Eleven of these have been in Mogadishu, according to a tally of AFP figures.

All of them involved car bombs.

The deadliest attack in the country’s history was a truck bombing in October 2017 in Mogadishu which left 512 people dead and around 295 injured.

Do not parade yourselves in Okene town, govt tells masquerades

US opens diplomatic mission in Somalia after 28 years