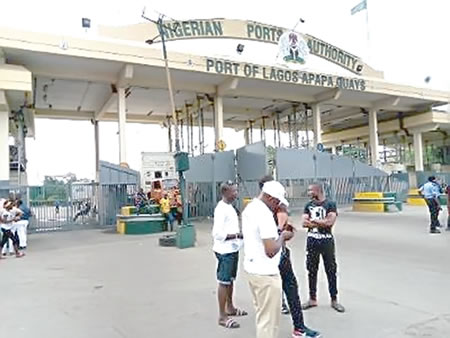 Maritime workers under the aegis of the Maritime Workers Union of Nigeria (MWUN) on Friday suspended its industrial strike action which has led to the grounding of port operations nationwide since Wednesday.

According to a statement signed by the associations President-General, Comrade Adewale Adeyanju and Secretary General, Comrade Felix Akingboye on Friday, the Union stated that it is suspending it’s three days strike action due to a larger truce meeting holding next week between the International Oil Companies (IOC) and the Nigerian Ports Authority (NPA), Nigerian Shippers Council (NSC), Nigerian Maritime Administration and Safety Agency (NIMASA), and the NNPC.

“We wish to thank you all for the solid support /solidarity given to the Union for the past few days that we have embarked on a strike action against the management of the International Oil Companies (IOCS) who have taken delight in breaking Nigerian laws with impunity and also denied us (the Dockworkers) payment of Salaries/wages for the past one (1) year.

“We have noted with grave concern that some major stakeholders in the industry who are not in any way involved on why the Union embarked on a strike action are adversely affected in their operations.

“However, arising from the intervention of the Permanent Secretaries, Federal Ministries of Transportation, Federal Ministry of Labour & Employment, some notable Stakeholders especially, the Managing Director of Nigerian Ports Authority Ms. HadizaBala Usman and her management team, whose two two weeks ultimatum to the IOCS on the same issue expires on Monday 8th July 2019, to recognise the Government appointed Stevedores and pay the Dockworkers their outstanding Wages/Salaries, the Management of NIMASA, Dr PetersideDakuku, Nigerian Shippers Council, Barr. Hassan Bello and Seaport Terminal Operators Association of Nigeria (STOAN) Princess Vicky Haastrup,  we have decided to suspend the strike action pending the outcome of the meeting scheduled to take place next week between the management of NPA, NIMASA, NSC, NNPC and the IOCS with the leadership of Maritime Workers Union of Nigeria.

“We wish to appreciate the timely intervention of the leadership of the Nigerian Labour Congress led by Dr Ayuba Waba (mni).

We also use this opportunity to thank our sister Unions namely Comtua, Ancla, Nagaff and all members of the Maritime Workers Union of Nigeria for their solid support/solidarity whilst the action lasted.”