MAPOLY, NANS bicker over appointment of rector, others 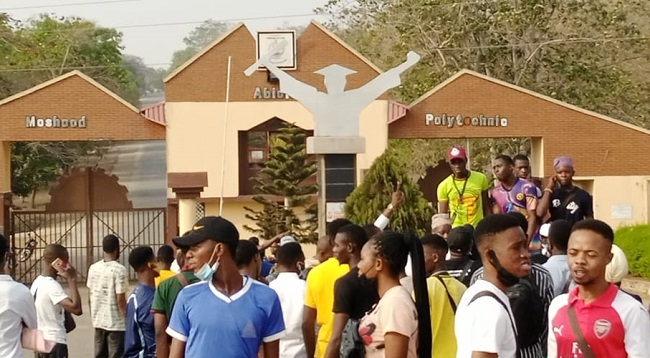 The management of the Moshood Abiola Polytechnic (MAPOLY), Abeokuta and the National Association of Nigerian Students (NANS) have traded words over exorbitant charges in the school and the delay in the appointment of a substantive rector.

Nigerian Tribune learnt that the students’ body, during the protest held in front of the school gate on Tuesday, equally demanded the reconstruction of the road leading to the school.

The institution’s Public Relations Officer (PRO), Mr Yemi Ajibola, when contacted said the action of the students was “politically-motivated.”

The PRO said all the issues raised by the students had been adequately attended to by the institution’s management. He, however, said a fresh dimension to the protest was masterminded by some unscrupulous elements.

“The demands made by the students as of Friday have been met. We discussed and sorted out some of the issues raised, but to my surprise, I saw the NANS laying siege at the gate of the polytechnic and I was wondering what is the problem?

“The way it is, I want to believe that there is more to what we are seeing. It is like a sponsored protest and I’m seeing it as a target against the government because you are doing that in the state capital.

“What they (requested), the school authority cannot do it. They wanted a good road, they wanted more buses to ease transportation, they wanted students’ union election and we said the process has started but we will have to put some things in place before we can do the election, they said they want 60 – 40 mode of payment and we said, it has become a government policy and if we have to reverse it, then we have to get back to the government.

“We have done all these and yet they are not bulging, so I want to believe that there is more to what they are asking for. Some people are behind the scene wanting to discredit the government. The protest is political, the 2023 election is around the corner and people will want to use the students, the youth, NANS for that matter to get at the government,” the PRO said.

Colleges education would have suffered terribly without TETFund-COEASU President