Many feared dead, as local boat explode in Yenagoa 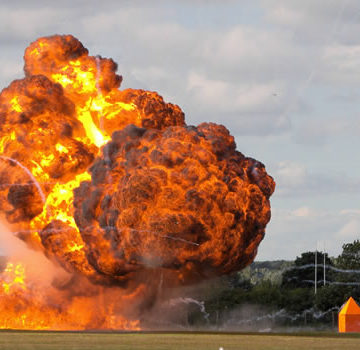 AT least seven persons are feared dead after a local market boat in which they were travelling in exploded at the popular Swali market in Yenagoa, the Capital of Bayelsa State.
According to a survivor, Miss Deinyefa, the boat was conveying about 40 persons, food items and PMS worth millions of Naira to Akassa in Brass Local Government Area had barely left the Swali Jetty before it exploded and burst into flames.
She said “when they loaded our goods on the boat, they then drove to a floating petrol station near the jetty and started laoding gallons of fuel into the boat. After they finished, the boat started moving and not long after, the boat exploded.
ALSO READ:  Lawyers in Ekiti protest unjust killing of colleague
“I saw a nine-year-old boy and his mother sitting close to the gallons of fuel caught by the explosion as we tried to escape. When I jumped into the water, a woman who could not swim grabbed me. It was by the grace of God I brake free and made my way to the sure.”
An eyewitness, Mr Makeni Freeman, said no property was recovered from the boat and that he saw some person burning as they jumped into the river for safety.
“I have been working at this jetty several years and these boat drivers are used to loading fuel in their boats, while market women are on board the boat. I knew this would happen one day. I am sure over seven persons must have lost their lives in the accident.”
However, all attempts to reach the state chairman of Maritime Workers Union, Comrade Ogoniba proved abortive, as his lines were switched off.
In his own reaction, the Public Relations Officer of the Nigeria Security and Civil Defence Corps, DSC Harcourt Johnson, said the fire may be caused by a spark from the engine of the boat.
“These local boats are designed in such a way that where they keep their fuel containers are close to the engine but what they don’t know is that when fuel splash on the engine, a little spark could course fire.
“Let me not say they are ignorant to these dangers, they know this but they just ignore this fact. This may have been the course of the fire on that boat.”
Bayelsa state
Share