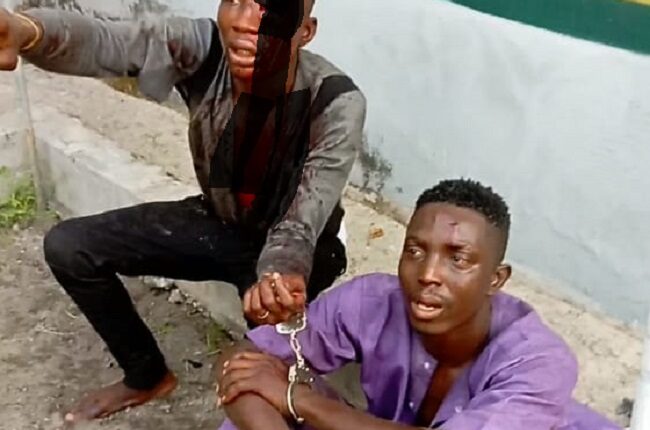 The agency Director of Public Affairs, Adebayo Taofik, confirmed this in a statement he signed on Sunday and made available to the Nigerian Tribune.

He also added that “the General Manager of LASTMA Mr Bolaji Oreagba disclosed that they were nabbed by the patrol team of the agency while on duty monitoring and controlling traffic around Lekki-Ajah axis of the State.”

According to the general manager “our officials while on traffic patrol heard passengers with loud voice shouting thieves! thieves!! inside an unpainted T4 commercial bus (AAA 750 XX).”

The LASTMA image-maker also continued that “while trying to stop the driver he drove dangerously and our men pursued them with LASTMA patrol vehicle down to Ikate where they were blocked by another pathfinder car belonging to a good samaritan.”

According to Adebayo, “Mr. Oreagba confirmed that while two suspects were arrested, the other remaining two escaped with the P.O.S they used to withdraw passengers money inside the T4 commercial bus.

“The two arrested suspects with the recovered unpainted T4 commercial bus were later handed over to R.R.S personnel who were on pin-down at Chisco, along Lekki- Ajah.”

The general manager however advised Lagos residents to always ensure they board buses at designated garages and always be vigilant/keen-eyed especially when boarding public vehicles.

One of the rescued passengers, Mr. Christophe Omukoro, said he boarded the unpainted commercial bus from Alfa-Beach going to Ikate.

He disclosed that they were four with P.O.S machine collecting passengers ATM cards and withdrawing money from individuals’ accounts.

Mr. Omukoro confirmed that passenger raised the alarm after they had collected their phones with other valuables items from them.