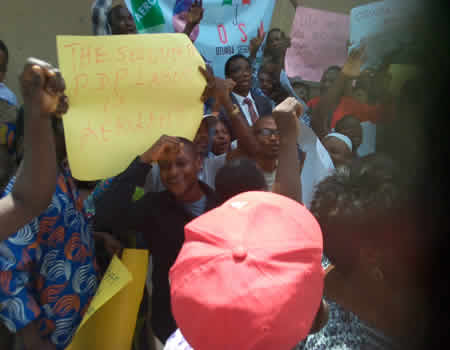 The crisis rocking the Lagos chapter of the Peoples Democratic Party (PDP) took a new dimension on Tuesday as a chieftain of the party, Otunba Segun Adewale, stormed the secretariat, together with core of his supporters, declaring himself as the PDP chairman in the state.

Adewale has in several reports laid claim to the chairmanship position of Lagos PDP, contending that the tenure of the incumbent, Dr Adegbola Dominic, expired last December.

He also said based on the 2016 state congress of the party, he was the legally recognised chairman.

Adewale, who is popularly addressed as Aeroland, made good his promise, as he stormed the party secretariat with scores of his supporters, gained entrance and took control of the premises in the presence of security officials.

The supporters were seen with various placards with inscriptions such as: “Please come and rescue us from Bode George,” “Eddy Olafeso and BG are cartels for failure for PDP Lagos and South West,” “The solution of PDP Lagos State is Aeroland,” “Otunba Adewale is the right man for PDP Lagos,” “Aeroland contributed to the growth of PDP Lagos State, he has the winning spirit we need,” among others.

Addressing scores of protesting party members and supporters, Adewale reiterated that he remained the authentic chairman of the party, declaring that he was in the struggle to liberate the party from the grip of few individuals who had held it captive.

According to him, the incumbent, Dr Dominic was never elected in any of the state congresses of the party but was allegedly handpicked by the former Deputy National Chairman of PDP, Chief Olabode George.

“I emerged as the state chairman during the reign of the then national Chairm6an of the party in 2016 to oversee the affairs of the party for four years, which should ordinarily terminate in 2021.

“I stepped aside when there were some issues within the party, which does not amount to my resignation as the Chairman,” Adewale said.

This was just as he boasted that he had the support of most chairmen of the party in the state, accusing the current leadership of further dividing the party.

National Vice Chairman of Southwest PDP, Eddy Olafeso, has, in his reaction, faulted Adewale’s claim, declaring that Dr Adegbola remained the Lagos PDP  chairman until the National Working Committee (NWC) of the party called for a fresh states congress nationwide.

Olafeso, who spoke in a telephone chat,  maintained that Otunba Adewale was not a PDP member and was, therefore, not ready to discuss with him, describing him as a joker.

“Adewale is not a member of PDP, he went to contest in Ekiti and now he is back. At the National Working Committee (PDP), we have taken a decision on him. He is a joker, Dominic remains the Lagos PDP chairman until a fresh state congress is called by NWC nationwide,” he said.