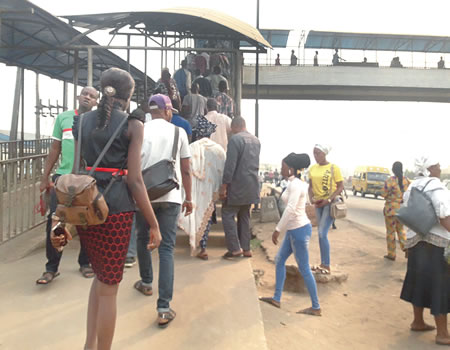 THE Federal Government has disclosed that four pedestrian bridges are to be constructed between Ibadan Tollgate and Ojoo, as part of ongoing reconstruction of the Lagos-Ibadan expressway.

Director, Highways Construction and Rehabilitation, Federal Ministry of Works, Mr Funso Adebiyi, disclosed this after a meeting with some officials of the state government, in Ibadan, at the weekend, Adebiyi said the construction of the four pedestrian bridges will take care of the high human density on tollgate and Ojoo axis.

He, however, said officials of the Federal Government and Oyo State government will be embarking on a tour of the road stretch, to decide where the pedestrian bridges will be sited.

This is as he added that the Federal Government was collaborating with the Oyo State government for effective management of traffic control while the construction works last.

Describing the Tollgate to Ojoo axis as one of the busiest sections of the project, with high traffic volume, Adebiyi, however, noted that the road will be closed and opened up at about 4 kilometres interval to ease the expected traffic build-up.

He appealed to road users to show understanding, empathy and take ownership of the project.

The director said construction works on the expressway is more than halfway gone, with plans to commission the project within the first quarter of 2022.

He ruled out compensation for those whose structures will be demolished, noting that such structures were built on the right of way of the Federal Government.

He, however, noted that no major demolitions are to be done except some kiosks and extended parts of some filling stations.