• Commences distribution of items to Lagosians 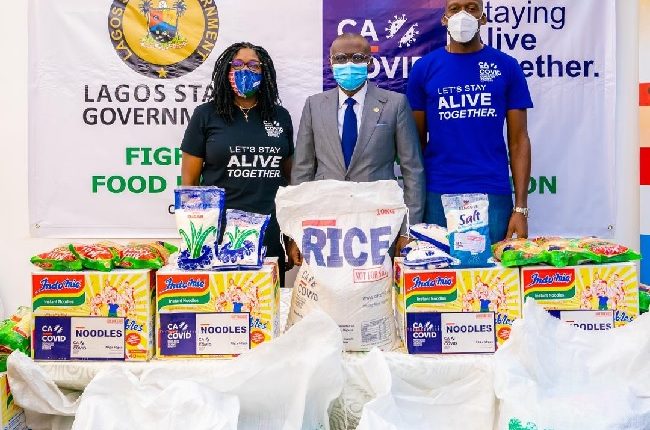 Lagos State government has said it will commence distribution of 107,546 food palliative packs which were handed over to the state government by the Coalition Against COVID (CACOVID) for distribution to Lagosians, especially the vulnerable and less privileged in the state.

Governor Sanwo-Olu received the food items at the Lagos House, Alausa in the company of the deputy governor, Dr Obafemi Hamzat; Chief of Staff (CoS), Mr Tayo Ayinde and the Acting Commissioner for Agriculture, Ms Abisola Olusanya, among other state officials and representatives of CACOVID.

The governor later distributed part of the items to some of the beneficiaries who were present at the ceremonial handover of the food palliatives.

Speaking on behalf of the state government, the State Acting Commissioner for Agriculture, Ms Abisola Olusanya, said the food items were meant for the indigent residents of the state and the elderly.

“We are here today for the handing over ceremony of the Coalition Against COVID-19 pandemic distribution for the food items that were donated by this group as far back as April- May but which Lagos officially is just receiving.

“According to the CACOVID team, Lagos State is supposed to receive 107,546 beneficiary packs for our citizens – for the indigents, the elderly, for those that do not have the wherewithal or the capacity to have food on their tables on a daily basis,” she said.

Olusanya said the food items were being repackaged by the ministry to ensure that each beneficiary gets the right quantity of items, pointing out that the state would, in terms of the distribution modality, borrow a leaf from the experience garnered during the lockdown period when it pioneered the distribution of over 50,000 food beneficiary packs.

“We have these food items at a location, where our team from the Ministry of Agriculture is doing the repackaging, to ensure that a single beneficiary pack gets to the right people and also with the right quantity. We do not want a situation where they receive the items and they claim that they have not received garri or they have not received rice.

“That is why under the administration of Governor Babajide Olusola Sanwo-Olu, we have taken the pains to get bags marked, to print on them the Lagos State logo, the CACOVID logo and to put these items in each pack, such that we have transparency across the board.

“But nonetheless, with regards to the 107,546 packs, we are still repackaging and so far, the team has been able to repackage about 50,000 beneficiary packs. Until we finish repackaging, before we can ascertain and say this is the quantity that we have actually received as Lagos State,” the commissioner said.

“CACOVID-19 team is also working alongside our team to ensure that in terms of the audit, in term of the numbers, we are both on the same page. So currently, about 50,000 is what we will say we have taken possession of and we will start with the redistribution in the next couple of days,” she said.

He said the idea behind the kind gesture was to take care of fellow men, noting that things were tough and the less privileged needed help.

“So, they need help. Could we do more? We will love to and could the Governor do more, I know he will love to do more. But this is a start and we are just basically saying that Nigerians for Nigeria are fighting this fight,” Okobi said.

Buhari should consider #EndSARS protests as warnings from Allah ― Gumi