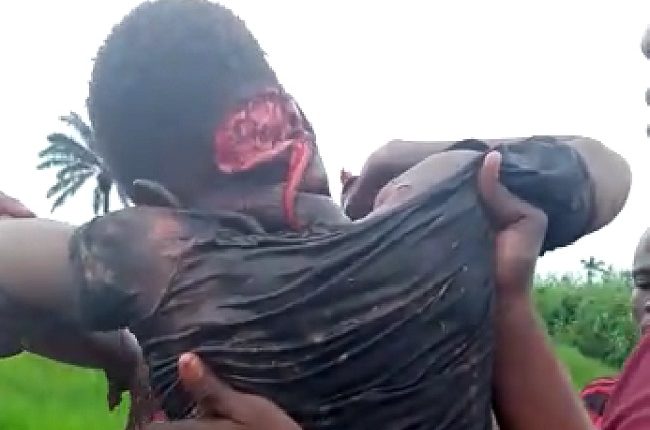 Unknown assailants have invaded and attacked one Miss Chinenye in Aroh Amaeze community in Ishiagu, Ivo Local Government Area of Ebonyi on her way to her farm.

The victim who is still in her late 30s was reportedly left to die in the pool of her own blood unconscious at the farm by the hoodlums after inflicting matchet cuts on some part of her bodies including head, neck, legs and hands at Ugwueziavo, in Amaeze.

However, she was rescued and taken to Nyeche hospital, Ishiagu for medical treatment.

When Tribune Online visited the community, Mr Uchenna Anyim, former chairman of Amaeze community said that the incident has left the entire people bewildered and confused.

He then described the attack as ‘callous and barbaric’ saying that the community would not spare any effort to unmask the perpetrators as they have reported the incident to the Ivo Divisional Police Headquarters.

“The incident happened on Monday at Ugwueziavo and we have reported the incident to the police and they have commenced an investigation into the attack.

“The victim has not died, though she’s in serious pains and has been in intensive care unit battling for survival.

“The entire community is in shock over the incident and we have vowed to uncover the perpetrator of this evil act against our sister,” Anyim said.

Miss Christy Aja, a close relative of the victim who spoke to our correspondent said that the incident happened around 6:a.m adding that the suspects trailed their victim to a farm at Ugwueziavo where they unleashed several machete cuts on her before fleeing.

“She left very early for the farm because she usually leaves early in the morning anytime she wants to go to the farm and there were few people going to the farm by that time.

“From what we gathered from her, the suspects speak Izzi or Ezza dialect.

“My sister is not the trouble type or somebody that keeps many friends; she keeps to her self, we wonder why some people would want to kill her in cold blood,” Aja said

“We have a report from the Police Divisional Headquarters, Ivo LGA that a woman was severely attacked, left for dead after been inflicted with several machete cuts by her assailants.

“The police have commenced an investigation into the attack and we assure the public especially relatives of the victim that perpetrators of the dastardly act will be fished out and made to face justice,” Odah said.

Ondo 2020: PDP not divided over Jegede ― Campaign organisation
The All Progressives Congress (APC) has won 14 out of the 18 chairmanship seats in the just-concluded Ondo State local government elections conducted in the state last Saturday…Woman macheted  Woman macheted

The chairman of Ondo State Independent National Electoral Commission (ODIEC), Prof. Yomi Dinakin who made this known while announcing the results of the election said the commission is still awaiting the result of four local government areas…Woman macheted