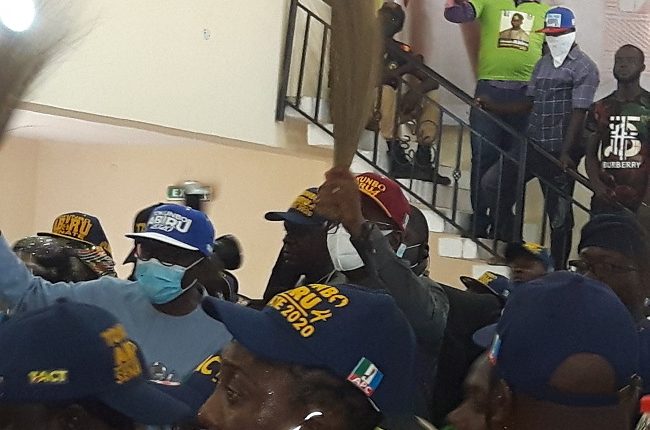 Candidate of the All Progressives Congress (APC) in the Lagos East Senatorial bye-election, Tokunbo Abiru, has assured residents of Shomolu-Bariga Local Government Area of the state of qualitative representation and empowerment programmes, if voted for on October 31.

Abiru gave the assurance while speaking at a stakeholders’ meeting, on Tuesday, which had in attendance party supporters, elders, elected members, members of the National Union of Road Transport Workers, Student Union representatives and representatives of the physically challenged persons in Shomolu, Lagos State.

Appreciating the mammoth gathering of party supporters, Abiru, responding to cheers and banters said, “I want to appreciate your show of commitment and support right from my affirmation till date. I promise never to take you for granted. I will never disappoint you all and I promise to abide by the ideals of the party. I can see the energy in the air and I am assuring all our youths, men and women in Shomolu/Bariga Local Government of quality representation and empowerment programmes if elected as your representative in the Senate.”

Reacting to the large turnout of party men and women, Chairman of the Lagos East bye-election campaign committee, Hon Kaoli Olusanya expressed dissatisfaction as he disclosed the mammoth gathering do not translate into votes for the party.

He said: “The atmosphere is politically charged and I can see loads of energy in the system. It is, however, unfortunate that this does not translate into a vote. Lagos State has the highest number of registered voters in the country but in every election, we record the lowest number of votes. In 2015, Governor Sanwo-Olu got only 40, 000 votes from this local government. We can do more than this. In term of voting, I will rate Shomolu/Bariga pass. In this by-election, I am charging all religious leaders to speak with their congregation.

We must see a change in the voting pattern and number of the vote recorded come October 31. We want Shomolu to give us 100, 000 out of the 300, 000 votes. This is easy to do if there is commitment. Let’s mobilise others around us to show that we truly have the strength.”