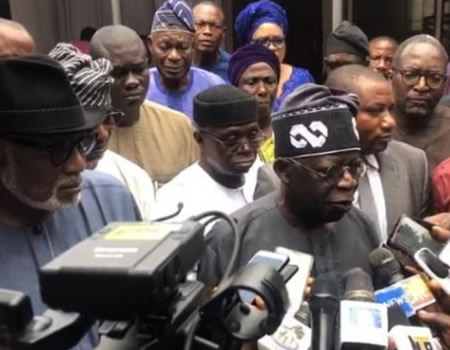 AN exploratory peace meeting fixed for last Thursday by loyalists of a former governor of Lagos State and national leader of the All Progressives Congress (APC), Senator Bola Tinubu, to end the crisis in the Lagos chapter of the party failed to hold, Sunday Tribune has learnt.

The aborted meeting, which was at the instance of Chief Tajudeen Olusi, could not hold, according to Sunday Tribune investigation, because a quorum could not be formed by those listed for it.

Former Speaker of the Lagos House of Assembly, Adeyemi Ikuforiji, also expected at the meeting, didn’t make an appearance.

Olusi is Tinubu’s man Friday and one of his honchos that recently met with President Muhammadu Buhari to stave off the dissolution of Lagos State executive of the party.

The mission failed as the National Executive Council (NEC) of the party, on Tuesday, December 8, 2020, dissolved all executive committees in all states of the federation.

Tinubu is strongly believed to be nursing a presidential run and the peace meeting was said to be the first in a series lined up for the remaining five states in the South-West.

It was gathered that once unity is forged among the tendencies in Lagos and the two existing factions rallied behind the former governor, it would be easier for him to secure the delegates of the rest of the zone, despite the rumoured presidential aspirations of former governor of Ogun State, Ibikunle Amosun and Ekiti State governor, Kayode Fayemi.

Before the January 7 date was fixed, Olusi, said to be acting on Tinubu’s instruction, reportedly met with a leader of the Fouad Oki faction of the APC in the state to seek truce.

Also present at the said meeting was a disgruntled chieftain of the party (name withheld) who is currently souring on Tinubu, despite the chummy relationship between them in the past.

The party in the state is currently factionalised between a group loyal to Oki, a former close associate of Tinubu and another headed by Honourable Tunde Balogun, fiercely loyal to the national leader of the party.

Balogun is the current chairman of the state caretaker committee, but in an interview with Sunday Tribune, Oki was confident Balogun’s days of relevance as the chair of the party were numbered.

A future date is reportedly set for the peace parley.

A source told Sunday Tribune that both factions would be expected to nominate their representatives to the future meeting, though leaders of the Oki faction are said to be sceptical of the meeting achieving much.

The main grouse of the faction about Tinubu is the alleged lack of internal democracy in nominating candidates for public and party offices.

Senior members of the Oki faction also accused the national leader of imposition, an allegation rejected by the camp of the former governor.

It was learnt that for the peace accord to be meaningful, the faction loyal to Oki would strongly demand that the party is returned to the members in the state and the members must be allowed to pick their leaders and representatives at different layers of party politics and governance.

The emergence of now Senator Tokunbo Abiru, representing Lagos East Senatorial District as the candidate of the party was heavily criticised for lacking in internal democracy as other aspirants were reportedly asked by the party leadership to step down for him.

The dissolution of the party executive in the state, alongside others, was viewed as a victory for the Oki faction, which had vehemently kicked against the emergence of the Balogun exco.

The faction is already on the field mobilising members for the forthcoming membership registration/validation, which is also seen as another major milestone for the anti-imposition faction.

In the Sunday Tribune interview, Oki had boasted that political power would soon change hands in the state within the party, adding that the loyalists of the leader would soon cry.

While the peace move is still in limbo, another crisis is erupting in the state chapter of the party, Sunday Tribune has learnt.

The Balogun faction which controls the caretaker leadership currently operates local government party exco in all the 57 LGs and LCDAs as well as 377 wards.

The Oki faction is contesting the arrangement, Sunday Tribune has learnt.

During the 2018 congresses of the party, the Oki faction limited itself to the 20 constitutionally-recognised LGs and 245 wards, while the Tinubu faction conducted its own congresses in the 57 LGs and LCDAs and 377 wards.

The current pushback by the faction on the legality of party excos in the 37 LCDAs and the extra 134 wards is expected to be resolved by the national leadership of the party in Abuja before the commencement of the membership registration on January 25.

The Donald Trump coup and man on horseback

DPR warns against illegal sales of LPG in Delta