Kinsmen mourn army ex-provost marshall killed by bandits, say he is from Edo, not Borno 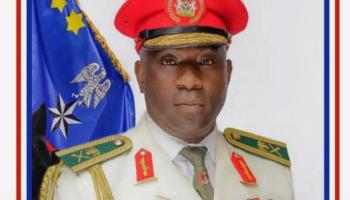 A former chairman of Etsako East local government area of Edo State, Mr. Momoh Armiyau has debunked reports in the media that Maj-Gen. Hussaini Ahmed, a former Provost Marshall of the Nigerian Army who was recently gunned down by suspected bandits around Abaji, along the Lokoja-Abuja highway is from Maiduguri, Borno State.

A grief stricken Armiyau popularly called Mbakwe said that the ex-provost marshall during the tenure of ex-Chief of Army Staff, Lt General Tukur Buratai is from Okpella, Edo State, the site of two multi billion dollars factories, BUA Cement and Dangote Cement companies and was heading back to his duty post in Abuja, along with his driver and in-law, when the gunmen sprang from the bush and shot him dead.

The politician insisted that the deceased general is actually from Awuyemi-Okpella and not from Borno State as was widely reported in the press.

He said: “The late general is my cousin. He was born and raised in Maiduguri, Bornu State but he’s from Okpella, Edo State.”

He said that shell-shocked family members are still in deep sorrow and quietly celebrated the recent the Muslim festival of Eid el Adha following the tragic killing of the top army officer.

The late army general was said to have attended the funeral of one of his cousins in Okpella and was on his way to the federal capital territory when he ran into the hoodlums.

Family sources disclosed that it was in the course of trying to reconnect with kinsmen in his ancestral hometown that he met his untimely death at the hands of suspected bandits.

The suspected gunmen were said to have opened fire on his vehicle and abducted his in-law to an unknown destination.

Sources said the soft spoken and army general did not travel with his retinue of escorts.

The remains of the deceased senior army officer were accorded a befitting Muslim burial at the Lungi Barracks Cemetery on Friday, July 16.