•Meets with Senator Kalu in Minna 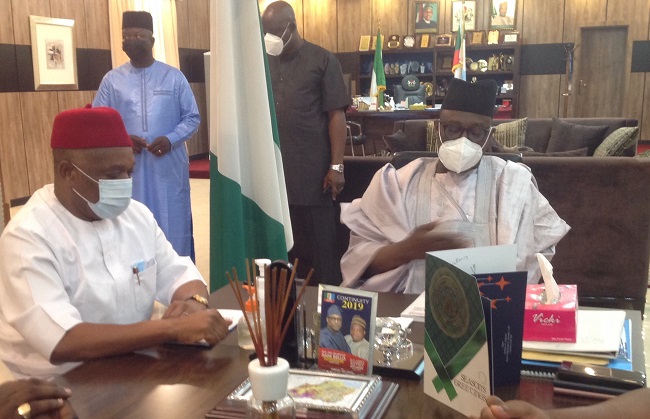 As the Niger State government intensify efforts towards the rescue of the abducted 27 students of the government science college Kagara, the State Governor, Alhaji Abubakar Sani Bello has expressed reservations towards the attitude of the Federal Government in rescuing the abducted children, adding that that the state has been left to its fate.

Although he acknowledged the fact that the Federal Government had sent a delegation to the state and have deployed additional 300 mobile policemen to the state, while the state government has been left to shoulder all the financial responsibility.

“So where is the support,” he queried, adding, that “at the moment we have not seen any federal support here since this incident occurred. Yes, we had a delegation that came to commensurate with us, but we have been left to ourselves.

The Governor spoke in Minna on Thursday when be played host to a former Governor of Abia State and Chief Whip of the Senate, Senator Orji Uzor Kalu who was on a sympathy visit at the Government House Minna, over the abduction of the Kagara school children and other security challenges in the state.

Governor Abubakar Sani Bello however said that with or without any support, the state government had already made a commitment to the people of the state to rescue the abducted school children and therefore will do everything possible to ensure their release unhurt.

“We will use whatever means and resources available to make sure the children return home safely,” adding that they don’t have the exact date these children will be released.

Earlier, the Chief Whip had told the governor that he was in the government house, Minna to commiserate with the government and the People of Niger State over the recent security challenges and the abduction of innocent school children by armed bandits.

Senator Kalu used the opportunity to call on the federal government to as a matter of necessity establish a joint security committee in the state and other troubled parts of the country to be able to have the representatives of all the forces in the state.

According to him, “This will fast track getting back these innocent boys and girls as quickly as possible.”

“We sympathize with you and we share in your grieve at the moment. We know what you are going through and this is why I’m calling on the federal government to try to set up a joint security committee in your state to be able to have the representatives of all the forces stationed in the state to complement the existing command in the state.”

The British Parliament at the Westminster Hall held a debate on ‘e-petition 554150, relating to Nigeria and the sanctions regime’ on Monday. The government of the United Kingdom has however responded…FG has abandoned us  FG has abandoned us

The surprise visit made on Friday night by the leaders of the ruling All Progressives Congress (APC) to former President Goodluck Jonathan at his residence in Abuja triggered a stir in the major political camps, resulting in at least four possible theories..FG has abandoned us  FG has abandoned us