Kaduna 2023: The search for El-Rufai’s successor 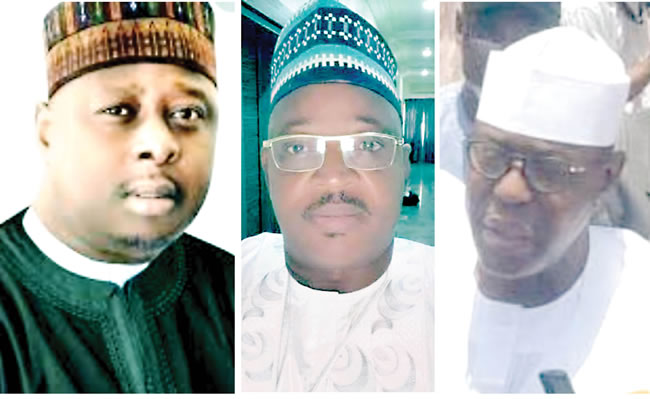 Like in other states, political activities are revving up in Kaduna State ahead of the 2023 general election. With the second term tenure of Governor Nasir el-Rufai winding down, several aspirants have continued to declare their intention to succeed him. So far, no fewer than 17 aspirants have indicated interest in occupying the Kaduna governorship seat. The aspirants span the ruling All Progressives Congress (APC), the Peoples Democratic Party (PDP) and the New Nigerian Peoples Party (NNPP). Especially with party primaries knocking, the aspirants have held meetings with their respective party stakeholders, stalwarts, delegates wooing them to emerge standard-bearer of their parties.

Those who seek to be the candidate of the APC are the state deputy governor, Hadiza Balarabe; Senator Uba Sani; Muhammad Sani Dattijo; Bashir Abubakar; Muhammed AbdulMalik Durunguwa; Bashir Jamoh and Sani Sha’aban.

Meanwhile, Senator Suleiman Hunkuyi and Shehu Ahmed Tijjani have indicated their interest under the NNPP.

The incumbent Governor El-Rufai has spoken about his favoured aspirant. The governor has said at different fora that the person who will succeed him will be a member of the inner caucus. The three aspirants perceived as being members of the caucus are the deputy governor, Senator Sani and Sani Dattijo.

Senator Sani is regarded as a longtime supporter of the governor, with the belief in some quarters that he actually influenced El-Rufai’s decision to join politics. Some observers hold that the lawmaker helped the governor stabilise in his first tenure and el-Rufai, in return backed the Sani’s senatorial quest. Sani is seen as a welfarist, philanthropist and a commander of grassroots appeal. However, as applicable to other aspirants, there are those who question whether Sani has the intellect, wits, capacity, pedigree and firmness of El-Rufai, who is said to have raised the bar of governance in the state.

Another person said to be in the caucus is deputy governor, Balarabe. Though she is yet to declare for governorship, her foot soldiers are all out consulting on her behalf. Hadiza, a medical doctor, is believed to have proved her pedigree with outstanding performance at the state primary health agency which endeared her to el-Rufai who chose her as running mate. With an unassuming posture, Hadiza is seen as someone who has brought innovativeness into governance. The Hadiza candidacy had also been brightened when El-Rufai recently stated that Kaduna could produce a female governor. A Government House source had remarked that the governor was tinkering with this possibility on the premise that Hadiza is from the Southern part of the state.  The argument is based on the fact that Southern Kaduna has only produced the late Patrick Yakowa as governor.

Dattijo, the former commissioner of Budget and Planning is another arrow-head of the APC administration. The former Chief of Staff is a member of the kitchen cabinet with age on his side. Many believe he is the architect of El-Rufai’s reforms in governance. Dattijo is said to have played a key role in securing loans for the state from international communities. In fact, some see Dattijo as el-Rufai’s anointed son. But, some believe that Dattijo is more of a technocrat than a politician, and will have to do a lot more to reach out to stakeholders in the politics of the state.

Another contender for the ticket of the APC is Bashir Jamoh, who is a major stakeholder. Jamoh is Director-General and Chief Executive Officer of the Nigerian Maritime Administration and Safety Agency (NIMASA). Jamoh is renowned as a cerebral and astute administrator and has the intellect as El-Rufai. Interestingly, Jamoh has connection with the first family of the nation as he is married to the daughter of Mamman Daura, who is an uncle of President Muhammadu Buhari. Notwithstanding his connection with the Buhari family, Jamoh is said to have contributed to El-Rufai’s victory in previous elections. As good as Jamoh’s candidature looks, his lack of a formidable political structure is seen as a challenge to a gubernatorial success.

Like Jamoh, Sani Sha’aban also has strong links with the Buhari family. Sha’aban, a former member of the House of Representatives, is married to Buhari’s daughter. Sani Sha’aban, a grassroots politician and philanthropist, has been eyeing the seat for decades. Though his name is known in political circles, some wonder why Sha’aban only resurfaces when elections are around the corner.

The relationship of Jamoh and Sha’aban with President Buhari is seen as one that can also alter the dynamics of who gets the APC ticket. A source said El-Rufai, party stalwarts and other stakeholders are considering the Buhari factor in deciding who becomes the standard bearer of the party.

Though Durunguwa, a permanent commissioner with the National Population Commission (NPC) does not belong to the inner caucus, he is a celebral philanthropist who has been in politics for decades. His coming this time is an expression of courage as he will be the first Fulani from Southern Kaduna if he gets the party’s ticket and becomes governor. But, his zone is said to be one that could be disadvantageous to his candidacy. Also, questions have been asked about his political structure in the state.

The entry of Bashir Abubakar, a retired Assistant Comptroller General of Customs, into the race, took many by surprise. Pundits, especially believe that though he has been a public servant for many years, the political space is a different ball game for him to handle.

However, the May 4 development, where El-Rufai met with other aspirants and told them that he and other stakeholders had picked Senator Sani as consensus candidate, may have ended the battle for who becomes the standard-bearer of the party.

Notwithstanding the fact that the APC may be going for a consensus candidate, findings showed that the three aspirants that had purchased the governorship form are Senator Uba Sani, Sani Dattijo and Sani Sha’aban. While Sani Dattijo has accepted the outcome, Sha’aban rejected the consensus arrangement. Except there is a change, Sani and Sha’aban are set to slug it out at the APC primary.

The battle for the ticket of the PDP is already looking as one between a former vice president, Namadi Sambo and a former governor of Kaduna State, Senator Ahmed Makarfi. Both attained national prominence by the positions they held. Makarfi once held the position of the interim national chairman of the PDP, while Namadi was vice president. Some pundits believe that both Sambo and Makarfi are playing godfather roles for their boys: Isa Ashiru and Sani Sidi. While Ashiru, the candidate of the PDP in 2019, is seen as Makarfi’s boy, Sidi is regarded as political son of the former vice president. Apart from support of Makarfi, Ashiru boasts of having a structure dating back to the governorship in 2019. On the other hand, Sidi, the former NEMA boss, is said to be only building a formidable structure, though he will want to ride on the network of the former vice president.

Despite not being the favourite of Namadi Sambo, the ambition of former Governor Yero cannot be belittled. Being a former governor, he is expected to give a good fight to clinch the party’s ticket regardless of whether he gets support from juggernauts or not.

Senator Shehu Sani’s interest cannot be dismissed. Having served in the 8th Senate under the APC, he is well known in politics. However, some pundits believe that he has a lot to do to assert himself in his new party, the PDP. A member of the PDP, Haruna Isa had said during an interview: “The party gives ticket to someone who has laboured for the party. I don’t see the ticket going to him (Senator Shehu Sani).”

But, as it stands, the primary of the PDP will be among Ashiru, Sidi and Yero.

The New Nigerian Peoples Party (NNPP) has two aspirants: Senator Suleiman Hunkuyi and Ahmed Tijjani. The duo contested before under different parties. However, some pundits note that Hunkuyi is known to show interest in a contest, at its outset, but usually withdraws for certain interests as the race peaks.

Aside from party platform, observers note that personality, pedigree, intellect of candidates will be crucial in determining the next governor of Kaduna State. However, pointing to a number of challenges facing the state, pundits also note the chosen candidate must also be able to present a convincing agenda to tackle issues of insecurity, poverty, among others, bedeviling the state.

I got two votes, over 300 delegates have called claiming that they voted for me, says…