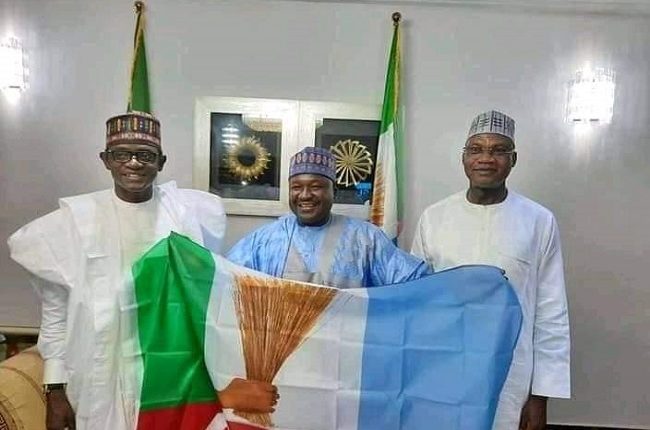 The membership of the ruling All Progressives Congress (APC) is swelling up again with the defection of Senator Mohammed Hamma Misau, another political supporter of Yakubu Dogara from the Peoples Democratic Party (PDP).

Mohammed Hamma Misau who represented Bauchi Central Senatorial District at the Upper Chambers in the 8th National Assembly, announced his defection back to the APC after he was at the Governor’s Lodge of the APC Caretaker Chairman and Yobe state Governor, MaiMala Buni where he made the official declaration on Friday.

Senator Isah Hamma Misau, a chieftain of the Peoples Democratic Party (PDP) in Bauchi State and the Chairman, panel of enquiry of the Bala Mohammed administration has returned to the All Progressives Congress and formed political ally with Yakubu Dogara.

Senator Misau made his defection public on Friday when he met the Caretaker Committee Chairman of APC and Governor of Yobe, Maimala Buni, who presented the party’s flag to him in Abuja.

While speaking with our correspondent in a telephone interview, Misau said: “I have been having a series of meetings and this (defection) just took place now in not more than 30 minutes ago. I am going to join my brother, Yakubu Dogara.”

Hamma Misau who was in Niger State two weeks ago as a supervisor for the PDP State Congress said that he has been consulting about leaving the party over two months ago saying. “Politics is local and this is what my people are telling me to do and today, I have just done that for them.”

He explained that “The way the Governor (Bala Mohammed) is handling the State, there is no way we will just be watching. After all, we have promised our people that there would be a change. That we would be better than previous governments but all of a sudden; it is even worse than the last administration”.

The Senator who was Chairman of recovery panel set up the PDP administration at inception said that, “There is no way we will continue to watch because if we continue to be in PDP in Bauchi State, people will think that we are part and parcel of things. We just have to move to salvage the state. By 2023, APC will present a candidate who will listen to us”.

He declared that about 50,000 supporters in only Bauchi Central were moving with him to the APC saying, “I have supporters across other local government areas in the state who are supporting me and are ready to join us.”

But In a swift reaction to the development, Bauchi State Chairman of the PDP that is ruling in the state, Hamza Koshe Akuyam described the defection as, “good radiance to bad rubbish, he came alone into the PDP in 2019 when he was denied ticket to contest, he could not win even in his polling unit, if he is going, bye-bye to him.”

Hamza Koshe Akuyam though described the situation as very unfortunate, he said that “you know he has a lot of issues hanging on his neck to settle with the federal government as one of the contractors, so, he has to look for a safe haven in order to have rest.”

The PDP state Chairman added that “as he and others like him are going, many others are coming in to replace them. We are not afraid of anything come 2023, it is a river and when we get to the bank, we will create a bridge with which to cross the river.”