June 12: I was attacked for holding a Nigerian flag in London —Faustina Anyanwu, London-based entrepreneur 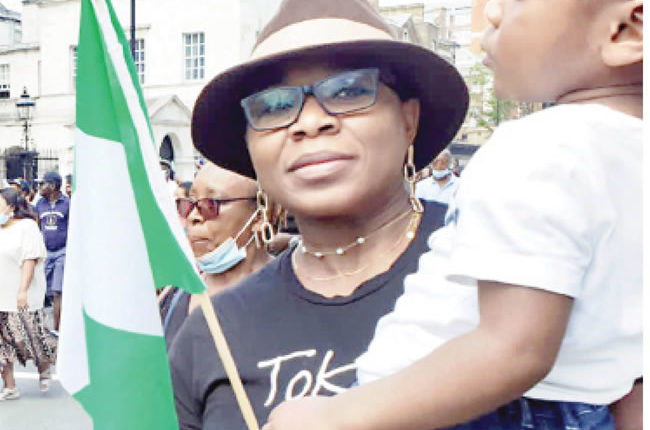 Faustina Anyanwu is a Nigerian London-based entrepreneur, publisher and social commentator. In this interview by Kingsley Alumona, she speaks about her June 12 London protest experience, about IPOB and other secessionist groups, her concerns and fears about President Buhari’s government, and the possible way the country can be rightly run.

BRIEFLY tell us about yourself and what you do.

I’m an Igbo-born Nigerian from Mbaise in Imo State, living in the UK. I’m a wife and a mother of four children. I’m also an entrepreneur, an author and a social commentator. I’m the Editor-in-Chief of C. Hub Magazine, the co-founder and CEO of Divas of Colour International Women’s Forum, and also recently the co-founder of an online fashion and lifestyle retail shop—Udara London.

In the last five years, what kind of stories have you been hearing about Nigeria in London? And how do they make you feel?

In the last five years, stories from Nigeria have been that of horror and embarrassment. Being in the diaspora, you can easily see and feel the backwardness, the incompetence, the barbarism and the poverty narrative of Nigeria. From the daily killings, kidnapping, mixed with total disregard for rule of law, corruption, ineptitude, nepotism, lack of initiative, dilapidation of infrastructure, death of our public educational system. Many of us in the diaspora are working ten times as hard to maintain and provide for our families at home, and it can be draining.

What do you have against the government of Buhari?

President Buhari was elected on the premise that he would handle the Boko Haram insurgency better than Dr Goodluck Jonathan. Unfortunately, not only has Buhari not been able to handle Boko Haram, he has instead multiplied Nigeria’s problems, producing Fulani herdsmen ravaging villages across the country. Bandits, unknown gunmen, kidnappers are having field day all day, every day. guns are now more available to criminals than food is to citizens. Corruption is at an all time high. The shedding of blood has become a norm. Nigeria is at the verge of collapse. The economy has performed its worst since Babangida. Naira is now over N700 to the pound sterling and over N500 to the US dollar.

Have you ever participated in any protest against Buhari’s government?

I participated for the first time during the #EndSARs protests. I came out and marched in support and honour of those youths massacred. And, the June 12 global demonstration against Buhari’s dictatorship destroying the hard-earned democracy in Nigeria is my second time.

You participated in the June 12 protests in London. Can you tell us what happened at that event?

The June 12 London protest was mostly peaceful. There were well over 300 people with different flags and placards with different inscriptions and views. We joined from the side as they came through where we were waiting, and my husband went towards the front, taking pictures and videos. I was carrying my two-year-old son, and we were walking slowly in the procession, chanting and singing as we walked along.

Out of nowhere, a lady asked me why I was holding a Nigerian flag and whether I was proud of Nigeria. I said to her, “We all are not happy with what’s happening. Isn’t that why we came out here to protest?” As I was speaking to her, about six others joined and began shouting and saying different things at me, but I ignored them. Suddenly, they started pushing me. But the Police were quick. When my husband saw what was happening, he ran to us. They also attacked him. We had to stop and leave with the police.

Why did you decide to take your two-year-old child with you to the protest? Were you not worried about his safety?

Can you tell the identities/tribes of your attackers? And, do you think they were hired/paid to disrupt the protest?

The attackers were pro-Oduduwas. I don’t think they were hired or paid to disrupt the protest. The protest was for all Nigerians to come with their grievances and to raise awareness of what was happening on ground. Like I said, the crowd had a mix of several factions—Biafra agitators, Oduduwa agitators and other concerned Nigerians like me who were not happy with what was going on at home. Unfortunately, the protest was hijacked by overzealous secessionists of Biafra and Oduduwa. And every other person’s voice was drowned out.

How did the UK police handle your confrontation with your attackers? And how do you think the Nigerian police would have handled the situation if it had happened in Nigeria?

The UK police were all lined up on the road. The police quickly moved in to de-escalate the situation, and got me out of the situation and dispersed the attackers. They made sure I was okay before allowing me to go.

I don’t think the Nigerian police are trained to de-escalate situations. What they know is aggression and to shoot at people at the least provocation. They would have made the situation worse.

What is your view on IPOB and the government’s crackdown on them?

Agitation is both a democratic and human rights of citizens. The IPOB has the right to freely express their dissatisfaction and intention to self-determine as long as they don’t break any laws. And to my knowledge, they haven’t broken any laws that warrants the government to proscribe them as terrorists. The high-handedness of the government in dealing with IPOB again exposes the nepotic nature of the present administration.

How do you think Nigeria should be run? What are your expectations of the government?

First of all, the three arms of government should be independently and efficiently run. At the moment, we only have the executive arm running the country as if we’re still in a military regime. Sadly, we’ve lawmakers who don’t have a clue of what their role in the government is. And, the judiciary is appointed by the corrupt executive, making it its extended arm instead of holding the government to account.

In effect, what we have at the moment is not democracy, and that’s the first and major problem right now. When the issue of the type of government we have is sorted, then, I think Nigeria should go back to regional governments with power devolved from the federal government. This way, each region will be able to take control of their resources and define their future. And if in the future any region still wants to leave, then, it’ll only be right to allow them to go.

What advice do you have for ethnic agitators in Nigeria?

Agitators have the right to express themselves within the confines of the law. However, they need to think through their motive for wanting to separate. Clearly, this current leadership is one-sided and divisive, but it’ll come to an end just as a season.

Agitators need to remember that you don’t make a permanent decision with sentiment and when emotions are high. It’s important we all focus on this wannabe dictator and ensure that this Buhari’s government is closely checked until its end in 2023, to ensure we have a peaceful transition of power. Hopefully, we have saner leaders who understand democracy, diplomacy and dialogue. Then with a referendum, If the people of any ethnic group overwhelmingly want to go, then so be it. Otherwise, what we’re doing now will only cause more chaos and an opportunity for this dictator to overstay his welcome and Nigeria could be launched into a full-blown military dictatorship again or we find ourselves fighting another war.

What advice do you have for Buhari and the people he runs his government with?

President Buhari must understand that Nigeria is a democratic nation, and he is there to serve all citizens of Nigeria fairly. His divisive and nepotistic approach has caused Nigeria over 10 years of growth. He needs to be honest to himself right now, raise his hands and honourably resign from the seat and allow more democratically advanced individuals to steer the nation back on track.

The lawmakers need to understand that Nigeria’s well-being supersedes their interests. They must now move motions to impeach and remove the incompetent President. And, Vice President Osibanjo and the ministers all need to resign in protest to end this madness.

What kind of Nigeria would you love to see after 2023?

I’m looking forward to a Nigeria where every citizen is safe and secured, where world-class education and healthcare are available to all. A Nigeria where talent flourishes and basic amenities are not luxury. Where people are paid their deserved salaries at the right time, and pensioners are not owed their pensions. A country where excellence is celebrated and appreciated, where any Nigerian can live in any part of the country and is not restricted from participating in any legal and political activities.

When last did you visit Nigeria? And what do you miss about Nigeria when in the UK?

Coming to Nigeria is something I always look forward to and on a regular basis. Unfortunately, the level of insecurity in the country has made it difficult for Nigerians in the diaspora to come home as they would want to.

I miss the vibrancy of Nigeria, the Nigerian humour, and the warmth of home.

In spite of the huge investment in the water sector by the government and international organisations, water scarcity has grown to become a perennial nightmare for residents of Abeokuta, the Ogun State capital. This report x-rays the lives and experiences of residents in getting clean, potable and affordable water amidst the surge of COVID-19 cases in the state…Six months after  Six months after

The Lagos-Ibadan railway was inaugurated recently for a full paid operation by the Nigerian Railway Corporation after about a year of free test-run. Our reporter joined the train to and fro Lagos from Ibadan and tells his experience in this report…Six months after Six months after