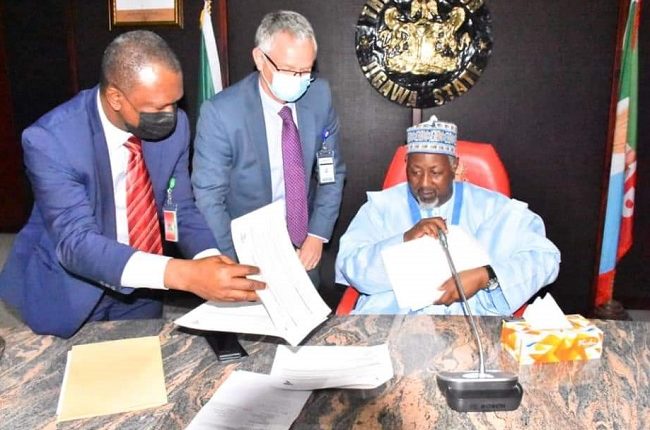 The Jigawa state government and Foreign and Commonwealth Development (FCSO) on Wednesday signed another five years 2nd strategic dialogue where the state will review the development framework.

Speaking while signing the new agreement, Governor Badaru Abubakar said “The Jigawa State Government is about to commence a review of it’s existing Development Framework popularly known as the CDF which is the State Policy Document providing the blueprint for the socio-economic development of the State in both the medium and long -term”.

Gov Abubakar explained that as a roadmap, the state government intends to make progress consultative and inclusive to ensure that it responds to the yearnings and aspirations of the people of Jigawa State.
The governor appreciates the UK government for supporting the implementation of various programs particularly in the areas of governance reforms, human development and economic growth.

According to him “I am happy to say that these have continued to impact positively on the socio-economic development of Jigawa State and wellbeing of its people in the 20 years relationship between the state and FCDO.”

“Since 2008, Jigawa State has ranked 1st in the independent national assessment conducted by Civil Resources Development and Documentation Center in Nigeria (CIRDOC-Nigeria ) supported by UK-Aid and other development partners.”

He added that “These reforms have also significantly contributed to our topmost performance in the World-Bank supported SFTAS Program which has allowed the State to access development grants. The GEMS program has also contributed in many ways to the performance of the State Investment Promotion Agency and the State’s rating in the ease of doing business in Nigeria.”

In his part the Director of the UK Foreign Commonwealth and Development Office (FCDO), Dr Christopher Pycroft commended Jigawa State for its commitment to remain at the fore of transformative development engagements in the North-West region.

Mr Pycroft also expressed appreciation for the state’s outstanding performance on Budget transparency, being number one among the 36 States Budget Transparency Index 2020 ranking.

He started further that “This Strategic Dialogue, therefore, gives us the opportunity of following up on your excellency ‘s priorities for moving Jigawa State forward and focused on the path of economic growth, good governance and investment in Jigawa’s people.”

“The FCDO Nigeria has played a strong role over the past 20 years in the development and growth od Jigawa and wants to continue to do so and sincerely hope that you find our support beneficial and supportive in your task of improving the lives of your citizens,” he stated.

Adding that, FCDO would continue to support Jigawa State through this process over the last three editions of SFTAS (State Fiscal Transparency, Accountability and Sustainability) implementation in Jigawa State, “we supported it because we believe budget transparency matters and the way it matters about citizens, and how they trust the government on how all these monies get used .”

The Director commended Gov Abubakar of Jigawa State on the sterling performance on Budget transparency-coming till among 36 States Budget Transparency Index 2020 ranking. ” I urge you to keep up the good work in your fiscal and budget transparency and accountability to the citizens of Jigawa State. This is such an important element in building the social contract between the government and the people. Please continue to open up and involve the citizens in your budgetary process with a focus on meeting citizens’ agreed and identified needs.