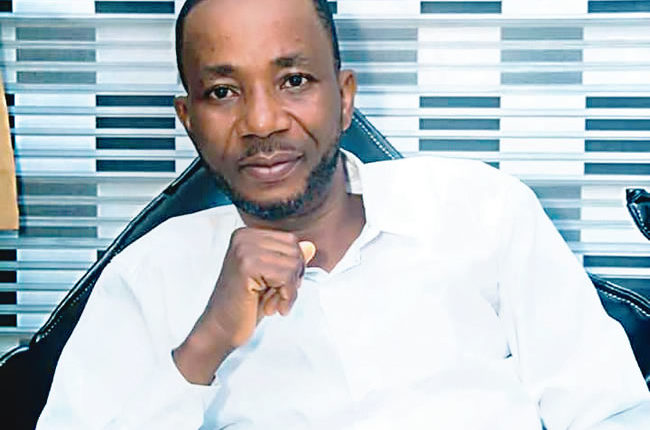 There are people whose faces hardly appear on movie jackets or the screen but they play pivotal roles in the making of a movie. One of such is Sola Olaibi, who is popularly known as Officer Gaji. He’s a movie producer, actor and production manager but he says acting remains very close to his heart. With almost 28 years in the movie industry, Gaji in this interview with SEGUN ADEBAYO speaks about the good and bad times he has faced, among other issues.

You are an actor, producer and a production manager, which of these came first?

I started as a production manager because getting into the movie industry back then was very hard. So, one of my bosses then advised me to join the crew that works behind the camera. I did this for some time until they discovered what I could do as an actor and from then, I got into acting. I am happy to have come this far. Being a producer came last and I am very happy with the journey so far. It has not been easy but God’s grace has sustained me.

How did you manage to bring all these things to life being just one person playing different roles?

Every new job comes with its challenges but as a professional actor and movie-maker, one must embrace every moment and make it count. That’s why for me, I always give my best to any job, irrespective of where it is coming from.

How do you feel, having been involved in movie-making for many years?

I feel great and fulfilled but the journey continues. I can’t begin to tell you some of the problems I have encountered in life being an actor. This is because even if I am not an actor, I would have faced other challenges anywhere I am. But above all, I am grateful to God for keeping me alive, healthy and happy.

With the number of years already dedicated to your job, looking back now, would you say you are living up to your dreams?

The number of years one has put into a job does not matter as much as one’s relevance to the field and how one is rated. To the glory of God, I am well-rated as a professional production manager, actor, and movie producer. My passion for the job drives me to give my best. I don’t think of any other job but movie-making. Whenever a producer says ‘I want you for this role’, I take it with all my heart and give it my best shot.

What was it like when you started; was it all rosy?

Did you say rosy? Nothing was ever rosy as far as the beginning is concerned. There were days one would feel so down and dejected. But one thing that keeps me going is my love for my job. Anytime I am on the job, I always feel great. That feeling of greatness always helps me to get through the hard times. It was not easy when I started; I faced a lot of problems from my family because they wanted me to be an electrical engineer; but I told them that acting is what I wanted to do. After a lot of back and forth, they fell in love with my job and they are proud of me today.

Many stakeholders in the country’s movie industry have bemoaned its lack of structure, particularly the Yoruba movie industry. What are your thoughts about this poor structure?

I have heard people say this countless times and I marvel at their submissions.

How do you isolate an industry from a big problem bedeviling the entire country? The problem trickles down from the top but people don’t blame the government; they heap the blame on movie-makers. For me, lack of structure is a general issue in Nigeria and it is not peculiar to the movie industry. The government is currently closing down a lot of places because of COVID-19 and they are also insisting that we should get our national identity cards.

I think the government can create a committee that would holistically look at the problems of the industry and proffer solutions. This committee would be made up of professionals who understand the problem. I am not talking about those who are coming with ulterior motives, whose aim is to further destroy what we are trying to build. They will look at the scripts, the equipment, and critical issues that need urgent attention. Once the industry is fixed and people can produce movies and be assured of returns on their investment, things will fall in line. Having said that, our leaders in the Yoruba movie industry as of today are working hard to make sure we have a well laid-out structure that would enhance our jobs and take us to new heights. I am proud of them.

Does it bother you that so much has been said but nothing has been done to address this problem?

A lot has been said truly, but thank God the present leaders are working tirelessly to make sure the Yoruba industry is given a better structure; so I’m not bothered.

Talking of switching from staying behind the camera to acting; does it ever feel like you should just stick to being an actor?

At this point, what do you think your career still lacks personally?

What I need most now is finance. I am happy when I see people willing to invest in my talent because sometimes when I look at the projects I want to execute, I get scared.

Why are you scared of your projects?

I always pity myself because the projects are big and I will need someone to bankroll them for me.

Why do people call you Officer Gaji?

I was given the name Gaji by my boss, Kunle Afod, when we were processing a project entitled Irinajo. Kunle Afod said let me give you the name Gaji, So, when I shot my movie, I entitled it ‘Officer Gaji’.

The aspect of producers not paying actors well is a lie.

But you and I know they don’t pay well.

I don’t think that is true because I believe we all want to make money when we go into a business. So, if anybody offers you what is too low for you, you are not under any duress to take it. It is your choice to say ‘I want this.’ If you are not comfortable, you can opt out. Have you observed how big the industry is growing every day? If they don’t pay them well, why do we keep having new people showing interest in acting? So, for me, that statement is not true.

For you, how much do you think an actor should be paid for a role in the Yoruba movie industry?

When talking about an actor’s fees for a role, we can’t be specific because the amount an actor will be paid will depend on the number of scenes he or she appears in.

As a producer, how much is the biggest fee you have ever paid an actor?