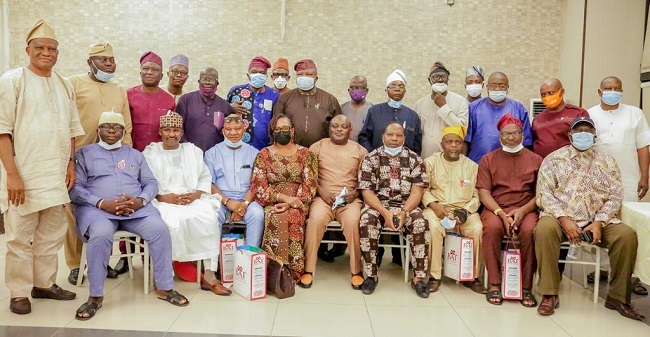 The rumoured ambition of former Lagos State governor, Senator Bola Ahmed Tinubu, to run for the office of the President in 2023 is gradually becoming a reality as current and former speakers of houses of assembly in the South-West have thrown their weight behind the aspiration.

At a meeting in Ibadan, Oyo State capital, on Wednesday,  the speakers gave their full endorsement to the rumoured presidential bid of the national leader of All Progressives Congress (APC), describing it as worthy and crucial against the current socio-political realities of the country.

The meeting which was convened by the Speaker of Lagos House of Assembly, Mudashiru Obasa, was held at Carlton Gate Exclusive Hotel, Ibadan, and attended by 20 current and past speakers of states’ houses of assembly in the South-West.

According to Obasa who kickstarted proceedings, the raison detre for the gathering was to formally introduce the Bola Ahmed Tinubu (BAT) Foundation and Movement and begin work in earnest for the actualisation of the 2023 presidential bid.

BAT Foundation, according to him, was meant to break the shackles of poverty in the Nigerian society and to create a coordinated humanitarian image for the national leader of APC.

Obasa stated that though Tinubu has not given the go-ahead for any campaign to start on the rumoured presidential ambition or officially declared interest in the presidency, there is the need to deliberate on this all-important issue on behalf of the APC national leader and why it is necessary to support him.

According to Obasa, it was decided that all the current and former speakers should, after the meeting, go back to their respective states to set up the template that would see to the actualisation of the agenda for Bola Ahmed Tinubu presidency in 2023.

Also speaking at the meeting,  Ambassador Aliyu Saulawa, who is the national coordinator of BAT Movement, was emphatic about the readiness of the group to ensure power shift to the South-West and for Tinubu to clinch the APC ticket.

Saulawa lauded Tinubu’s political leadership and principle, which he displayed by supporting President Muhammadu Buhari in the 2019 presidential election rather than former Vice-President Atiku Abubakar, who would have done anything for Tinubu to win his support.

Other decisions that were taken at the meeting include ensuring that power shifts to the South and that the South-West must produce the next president.

It was also resolved that Tinubu,  a Yoruba with the capacity, experience and means, should be the candidate to be supported to emerge as the next president of Nigeria.

The meeting agreed that Tinubu still needs to do more networking in Yoruba land, especially amongst serving and past governors, as well as traditional rulers in the region, to gain more support and reduce the opposition against his ambition.