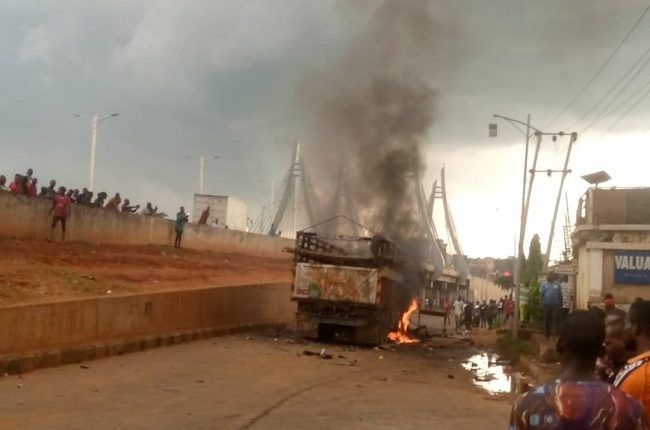 Some irate youths in Awka, on Friday, set ablaze a truck loaded with cows, over the death of some children hawking wares at Kwata flyover junction in Awka, Anambra State capital.

Nigerian Tribune gathered that the cows were burnt to death.

A source said the accident happened when a truck which was conveying cattle to an unknown location lost its brakes while descending the Kwata Junction slope, knocking down eight hawkers and injuring four occupants of two other SUV cars, which were all mangled.

The incident which happened about 2pm attracted irate youths, who burnt down the truck and the cattle, resisting attempts to free the cattle before setting ablaze the truck.

Our source was, however, unable to say if the driver of the truck and the truck attendant were spared at the time of filing this report.

Tribune Online also learnt that there was massive shooting in the area by military personnel to disperse irate youths who stopped attempts to tow the truck off the road to make way for free flow of traffic.

The shooting in the area caused residents and even motorists to abandon their vehicles and flee for their lives.

Attempts to speak to the Anambra State Police command’s spokesperson, DSP Toochukwu Ikenga for confirmation on the actual number of casualties was not possible as his phone was switched off.