•As banks, markets others shut down services 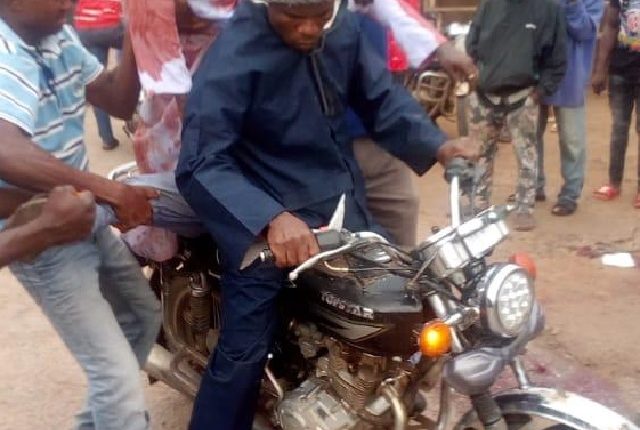 The order by the Indigenous People of Biafra (IPOB) that people should sit at home every Monday, starting from today, 9th August 2021, to compel the government of Nigeria to release their leader, Mazi Nnamdi Kanu, has claimed three lives in Anambra State.

Tribune Online gathered that at Nnewi, two people died in a confrontation between the Army and suspected members of IPOB.

The two people who died during the bloody confrontation that happened at Izuchukwu junction area of the roundabout in the industrial town, according to an eyewitness account, were a leader of Eastern Security Network (ESN) and a commercial motorcyclist.

Our source claimed that the problem started at about 7.00 a.m. in the morning when some IPOB members came out to enforce the sit at home order and in the process blocked the major roads in the industrial town.

Some unidentified soldiers according to him, however, came in to clear the items used to block the roads leading to an altercation between them and the IPOB members.

Sources said that the two victims were actually killed by gunshots by the soldiers.

Meanwhile, the industrial town has been reduced to a ghost town as the people who initially came out for their daily business had to rush back home.

Some vehicles were also smashed by aggrieved persons over the attack on the civilians by armed soldiers.

Also, a combined team of security agencies as at the time of filing this report later stormed the town to disperse the protesters.

Awka, the state capital, recorded partial compliance because commercial buses and tricycles operators were seen conveying passengers from one bus station to another.

Even at the banks’ location along Enugu-Onitsha expressway, the banks’ gates are locked with keys but customers were seen patrolling the vicinity waiting to see if the banks will eventually open for business later in the day.

Some Civil Servants were also seen going to their offices in line with the state government order of forfeiting their August salary if they obey the IPOB sit-at-home directives.

At the popular Eke-Awka market, traders shut down their shops for the fear of being looted by hoodlums.

At Onitsha, one person was shot dead, just as popular markets in the commercial city closed including, shops and commercial banks within the metropolis.

Our correspondent who monitored and observed the situation gathered that as at 7 am in the morning news had spread that a yet to be identified man had been shot dead at the Awada area of Onitsha.

Although no group has claimed to know the cause for the death of the young man, rumour has it that he was murdered by some IPOB boys who came out in the streets early morning chanting songs.

According to a reliable source who pleaded anonymity the deceased was murdered as early as 6 am because he refused to go back home when he was ordered to do so.

“I watched them from my window when the trouble started. The young man refused to adhere to instruction while trying to tell the boys who held him, hostage, the reason he wants to complete his journey.

“Suddenly they bounced on him and fight started. Before I could know what was happening I heard a loud shout and he slumped while he strangled to death.”

Meanwhile, when our correspondent contacted some of the people who reside near the main market, it was reported that all places were shut down with the presence of vigilante security men guarding the area. This has continued till 12 pm and still counting.

Other markets like the Ose Okwaodu market, Ochanja market, coca market in Uga all recorded compliance of the order, sit at home.

Though there were few vehicular movements of Keke men along the Awka Road, Ugwunakpankpa Road, Upper New Market, as well as New Cemetery Road.

Also observed were kiosks which opened for neighbours to buy some household items.

Mr Chinedu Egbuche who spoke to Tribune Online said it was unfortunate that people could not go about their normal businesses as a result of the order.

“The situation which we find ourselves in today is really not encouraging. Considering the economic meltdown in the state, people are not even looking good health-wise, hunger is everywhere yet. IPOB gave an order to sit at home today that is Monday. I feel bad about it.”

Another resident, Mrs Cecilia, informed our reporter that her son had NECO exams today but she could not allow him to go because she did not want anything to happen to him.

She pleaded with the Anambra State Government and the Federal Government to bring a lasting solution to the problem at hand.

However, Emeka Igwe, in his own reaction, attributed the sit-at-home order as the only way to inform their government of the need to give a fair hearing to the leader of IPOB, Nnamdi Kalu come October 21, 2021.

Also reacting a trader at Nnewi who resides in Awka, Mr. James Otu, appealed to Federal Government to release Nnamdi Kanu, to allow peace to reign in the South East region.

“I am also calling on IPOB members to stop confronting the Army and other security agencies because those the security personnel are killing in the cause of the process are Igbos and not Hausas or Yorubas,” he warned.

Our correspondent observed that some SSCE students were seen trekking to their various schools for their Mathematics Examinations.

The Police Public Relations Officer (PPRO) for Anambra State command, DSP Tochukwu Ikenga, could not be reached for police angle of the situation, at the time of filing this report.