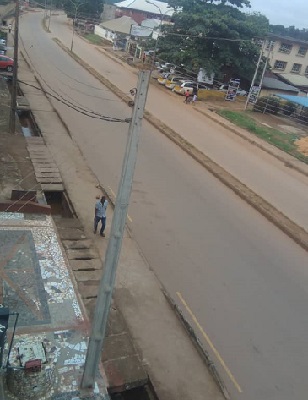 Enugu, the Enugu State capital, was, on Monday, shut down in terms of the regular activities as residents observed the sit-at-home order by the Indigenous People of Biafra, (IPOB).

In spite of the suspension of the order by IPOB, penultimate week, the roads were bereft of the usual vehicular traffic, except for some few bus and tricycle operators, making swift runs charging exorbitant fares on stranded commuters.

The motor parks, as well as loading bays of mass transit operators engaged in intra and interstate shuttles, were also not operational.

Schools had closed last weekend except for the Federal Government College, (FGC), which off-campus students could not afford to go to school owing to the dearth of available transport.

Offices, shops, markets and most public places including banks, also closed their doors to the public.

However, there was no unusual security beefy up or patrols or any encounter with suspected IPOB members.

The roads and streets were bare and free with young people engaging in street football.

There has been no word or threat from the government though.

Pedestrians could be seen on the streets, mostly looking for inner-city outlets to buy food and quaff drinks, while discussing the trend that appears to have become the new normal in the city.

Nobody was seen on the streets trying to observe and or enforce the sit-at-home order better known as the Ghost Monday here.

Enugu the Coal City remained calm and as it said on the streets; “Enugu State Is The Hands Of God.”

In spite of the huge investment in the water sector by the government and international organisations, water scarcity has grown to become a perennial nightmare for residents of Abeokuta, the Ogun State capital. This report x-rays the lives and experiences of residents in getting clean, potable and affordable water amidst the surge of COVID-19 cases in the state…  IPOB sit-at-home: Ghost Monday grounds Enugu again