The intercepted arms in Lagos 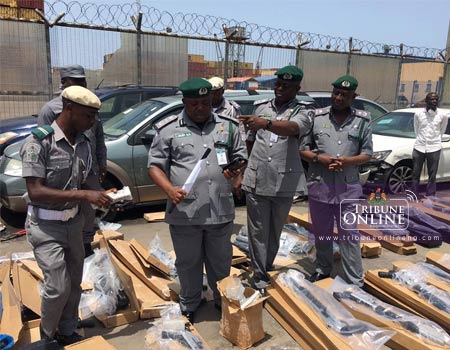 NOT a few Nigerians were worried last week when the news broke again of the seizure of large quantities of guns of different sizes and designs as well as gun accessories by the Tin-Can Island Port Command of the Nigeria Customs Service (NCS). About 440 pieces of various types of pump-action guns were allegedly imported into the country illegally by yet to be publicly identified persons. Many were disturbed that anyone could have the audacity to contemplate bringing arms into the country through the ports. In other words, the veritable concern is not only the suspected odious and pernicious purposes for which the illegally imported arms were intended: also very disturbing is the effrontery of the importers in bringing these large quantities of arms into the country through the ports that are ordinarily considered as well-manned national borders.

It  will  be recalled that sometime in January 2016, the Federal Operation Unit of the NCS  while on patrol reportedly intercepted, along the Mile 2–Apapa Road, Lagos,  a truck conveying a 40-feet container ostensibly laden with steel doors but actually with 661 pump-action rifles concealed within it! These two incidents, especially the first one, clearly exemplify the porosity of Nigeria’s borders. While the NCS should be commended for the interceptions and seizure of the cache of arms, it bears pondering over if the importers would have considered taking this major risk if they had not succeeded in the past or felt that they had a greater chance of escape. Perhaps it should be stressed that the rifles imported by these criminals are the types the Customs described as dangerous and under absolute prohibition, which makes their importation a deadly contravention of the law.This is quite unsettling against the backdrop of the delicate security situation in some parts of the country. The seeming porosity of the borders, especially the ports, either testifies to incompetence and culpable negligence on the part of the relevant security agencies or, worse still, criminal connivance with unscrupulous importers to bring arms into the country illegally or both.

We Urge the NCS to increase its vigilance and scrutiny of all imported cargoes into the country to ensure that they do not contain arms and other prohibited items. And more importantly, it should strengthen its investigation and prosecutorial functions so that persons or organisations that breach the laws of the land on the importation of banned items are promptly brought to justice. Specifically, the NCS must speedily identify and prosecute those behind the cache of arms it seized last week. This is imperative so that the sanctions meted out to the criminals can serve as a deterrent to potential importers of prohibited arms into the country.

We canvass swift investigation and prosecution because there has been virtually no feedback on the outcome of investigation and trial of those involved in the unlawful importation and clearing of 661 guns since January. There is no news about the status of the three persons who were reportedly arrested: the importer, the clearing agent and the person who was allegedly accompanying the prohibited consignment to its original destination. Also, the status is yet to be made clear of the three Customs officers involved in the clearing of the lethal container. The officers were initially declared wanted by the NCS but later reportedly turned themselves in.  The impression which this seeming lackadaisical approach to handling the grave issue conveys is that the incident is being swept under the carpet. This negative impression is unwholesome and is capable of giving a false sense of impunity to the criminals and their ilk that engage in the dastardly act. This is why many Nigerians are waiting for the authorities to fish out the importers of the guns and let the law take its course without delay.

Again, as the 2019 general elections approach, the need for preventing the proliferation of arms has to be taken seriously. Nigerians are living witnesses to the havoc that arms and ammunition in the wrong hands have wreaked and are still wreaking in some parts of the country.  All hands must, therefore, be on deck to prevent further availability of dangerous weapons to hoodlums, especially political thugs. Thus, in addition to coming up with a strategy to mop up illegally-acquired arms that are already in circulation, the security agencies, including the NCS, must ensure that they rein in the importation of arms through Nigeria’s borders, especially the ports. The country is already grappling with serious social and economic issues; adding heightened security concerns to these through virtually unchecked proliferation of arms will be too damaging to the physical and psychological wellbeing of Nigerians.