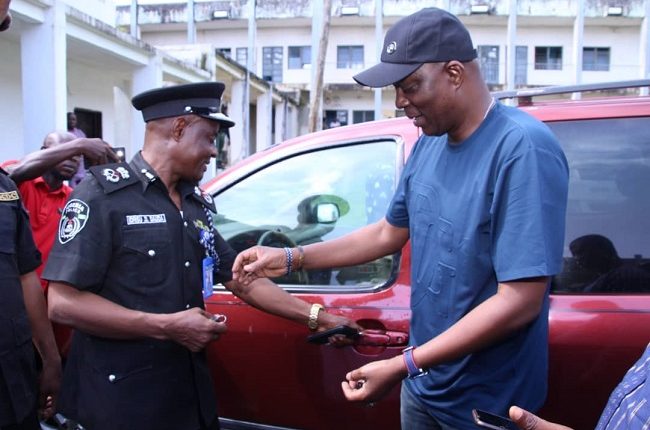 In a bid to enhance effective policing in Kabba-Bunu Local Government Area, the Speaker of Kogi State House of Assembly, Prince Matthew Kolawole has donated a Sienna Bus and motorcycle to the Nigerian Police.

The Speaker while handing over the keys to the Commissioner of Police, Idris Dauda, said the donation was part of his support to the safety of his constituents, urging well to do persons in Okun land to support the security of the state.

According to him, the state has enjoined relative peace in the past few years, noting that criminals must not be allowed to tarnish the feat the State Governor, Alhaji Yahaya Bello has achieved in the area of security.

Prince Kolawole directed Local Government Chairmen in Okun land to collaborate with security agencies and traditional rulers to fight the increased insecurity in the area.

He also advised local government legislative councils to domesticate the state anti-kidnapping law in their respective local governments, urging security personnel to provide quick responses whenever they are called upon.

According to him, the state anti-kidnapping law would soon be reviewed to include stiffer punishment.

The speaker also advised the state government to commence registration of Motorcycle Riders in Kabba as part of measures to check challenges occasioned by insecurity.

Responding, the Commissioner of Police, Idris Dauda commended the Speaker for the donation, saying it will go a long way in ensuring effective policing of the local government.

In spite of the huge investment in the water sector by the government and international organisations, water scarcity has grown to become a perennial nightmare for residents of Abeokuta, the Ogun State capital. This report x-rays the lives and experiences of residents in getting clean, potable and affordable water amidst the surge of COVID-19 cases in the state…  Insecurity Upsurge: Kogi Speaker donates Sienna bus, Motorcycle to Police