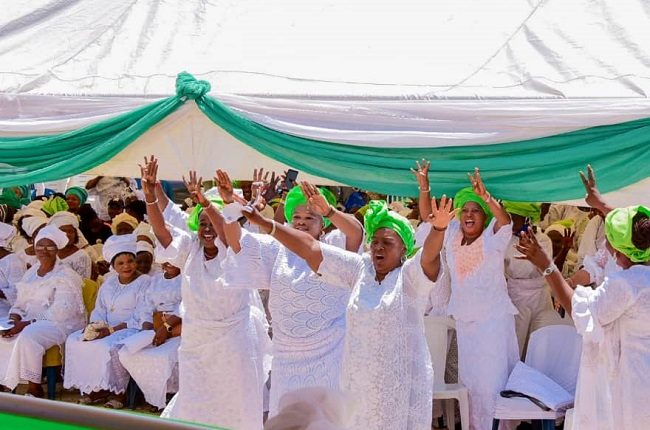 Hundreds of women across the thirty local government areas of Osun state on Wednesday organised a prayer session to tackle the spate of insecurities in the country.

The prayer programme which was held at the state government house on the morning of the day in Osogbo was organized by the wife of the state governor, Mrs Kafayat Oyetola.

Speaking at the programme, Mrs Oyetola explained that, the decision to organise the national prayers in all the states of the federation was taken at the Nigerian Governors Wives Forum (NGWF) having observed the dangerous dimensions of insecurity has reached in the nation.

She challenged women to go back to their homes and entrench values, love and the virtue of humanity in their household.

Her words: “However, the intervention will require that we work. We must start from our homes. Let’s change the culture that places money as the ultimate value of the relationship.

The programme however attracted women from various religious groups in the state while lectures related to the theme of the prayer were delivered by two front line women leaders in the state.Mrs Remi Wilson and Alhaja Latifat Kolawole.

In spite of the huge investment in the water sector by the government and international organisations, water scarcity has grown to become a perennial nightmare for residents of Abeokuta, the Ogun State capital. This report x-rays the lives and experiences of residents in getting clean, potable and affordable water amidst the surge of COVID-19 cases in the state…Osun women organise prayer  Osun women organise prayer

Over 18 million children exposed to toxic e-waste globally ― WHO