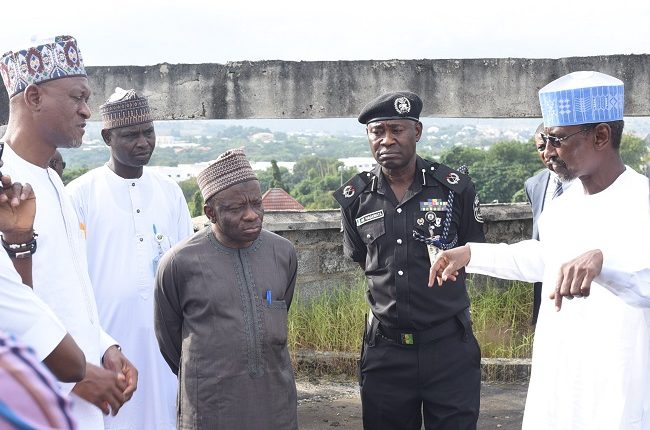 As the Federal Capital Territory Administration (FCTA) sustains efforts to ensure the security of lives and property in the nation’s capital, via the Department of Development Control, has sealed off a massive uncompleted 3-storey building located at plot 22 Cadastral zone, A05, Udi Hills Street, Maitama which is reportedly abandoned and posing security threats to residents of the area.

This followed the directive of the FCT Minister, Malam Muhammad Musa Bello, who personally led a team of FCTA and Security officials to the location on Tuesday.

Accompanied by the Coordinator, Abuja Metropolitan Management Council (AMMC), Tpl Umar Shuaibu, the Solicitor General of the FCTA, Barr. Garduya Bawa Ganiya, the Assistant Commissioner of Police in charge of operations in the FCT, Mr MB Magawata and other officials of the FCTA, the Minister took a detailed tour of the building which also has a basement parking area.

In the course of inspecting the structure, evidence of unwholesome activities were discovered and some squatters who were found in the building were immediately apprehended by security operatives.

Malam Bello reiterated the commitment of the FCT Administration to ensuring the safety of all residents of the nation’s capital and said that steps will be taken to ensure that abandoned and uncompleted buildings within the city do not pose threats to residents.

While carrying out the Minister’s directive of sealing the building on Wednesday, the Coordinator of AMMC said that integrity tests would be carried out on the structure and if it fails the test, its allocation will be revoked and the building will be pulled down.

The Coordinator said: “The building has been abandoned for a very long time, and presently, the FCT Administration has a policy of taking actions on abandoned buildings in the city.

“We have security challenges. This structure is susceptible to be used by criminals. Also, by the time a building is left unused for a long time, it is subject to rot and weakening; and this could trigger the collapse of the structure in the future.

“So we definitely have to seal and if there is any necessity for us to allow work to continue, we must conduct integrity test and make sure it passes the test before we allow that. If it means for us to revoke it, we will do it because we have the power to do so. The building also constitutes a risk to those living around here”.

On his part, Director, Department of Development Control, Tpl. Muktar Galadima explained that the Administration in the past met with owners of abandoned buildings in the Territory and agreed that they would conduct intercity tests and complete them.

He, however, regretted that while others resumed work and completed it, some did not, even as he disclosed there were measures to curb the issue of abandoned buildings in the FCT

In his remarks, the Assistant Commissioner of Police said that the squatters apprehended in the building will be questioned to ascertain their true identities and reasons for being in the building.