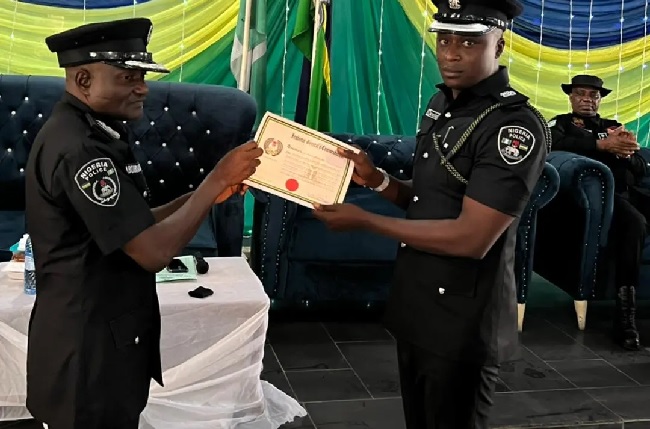 Buhari conferred the award on Amah, a Superintendent of Police (SP), at the fourth national summit on diminishing corruption in the public sector, held at the State House Conference Hall, Abuja.

The one-day anti-corruption summit, with the theme, “Corruption and the education sector”, was organised by the Independent Corrupt Practices and Other Related Offences Commission (ICPC) in conjunction with the Office of the Secretary to the Government of the Federation (OSGF) and the Joint Admission and Matriculation Board (JAMB).

Conferring the award on SP Amah for displaying exceptional courage and integrity in the discharge of his duties, President Buhari congratulated the awardee for his outstanding behaviour in the cause of discharging his (Amah’s) duty.

The President called on Nigerians holding public offices to emulate the awardee’s exemplary character with a view to fighting corruption in the country.

According to Buhari, “We need to kill corruption for Nigeria to move forward.”

Amah, an indigene of Plateau State, rejected the sum of $200,000 bribe for him to kill a case involving a Bureau de Change operator, one Ali Zaki, who conspired with others to rob a Nigerian to the tune of $750,000.

The police officer did not only rejected the bribe but also ensured that the suspect was brought to book.

Nigeria Ranks 86th In The World By Digital Quality Of Life

The fourth annual edition of the Digital Quality of Life Index (DQL) has reported that Nigeria ranks 86th in the world regarding digital wellbeing. That is out of 117 countries, or 92 per cent of the global population…