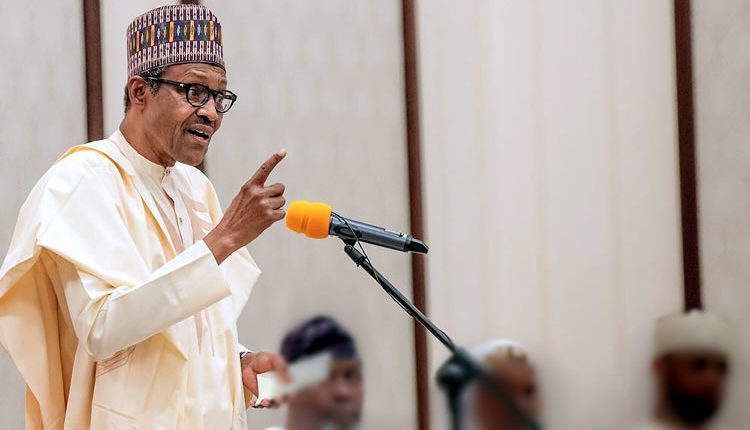 Determined to address the cases of the growing insecurity in the country squarely, President Muhammadu Buhari on Monday charged the nation’s Armed Forces to be apolitical and concentrate on defending the nation’s democracy from both internal and external aggressions.

Speaking while declaring open this year’s Chief of Army Staff Annual Conference in Abuja, President Buhari who acknowledged the successes recorded in the recent past by the Armed Forces of Nigeria in the various theaters of operations in the war against insurgency, assured that his administration would give high priority to the welfare of the Military Personnel and as well provide them with the required equipment to fight the insurgents.

President Buhari who was represented by the Chief of Defence Staff, CDS, Gen. Lucky Irabor while urging the members of the Armed Forces to face their constitutional duties squarely, he advised them to be professional, civil and adhere strictly to the rules of engagement and to stay away from distractions so as to be able to win the war against insurgency and restore sanity to the troubled zones in the country.

“I appreciate your continual effort to develop the Nigeria Army of the future as you review the activities of year 2021 and make provisions for year 2022. It is my desire that the focusing on leveraging be gains of your professional and training activities and move the Nigeria Army to a new level of military professionalism. In this being, I will urge you to ensure effective command by control of personnel and equipment in your formation for ultimate performance in the field.”

President Buhari who expressed satisfaction over the performance of the Chief of Army Staff for the very purpose to have a ready professional Army ready to accomplish assigned nations with a joint force at the defence of Nigeria, expressed optimism that the renewed emphasis and the high sense of training and disciplines and the effective command and control observance of the rule of law and excellent relations will enable the Nigeria Army to function effectively to bring more glory to the country.

“One of the key agenda of this administration is security, it is pertinent to note that for democracy to thrive and survive, there must be a security of lives and property, therefore, as the Army of our great nation, it’s your role to protect, and securing the nation is paramount. In performing this role, the required equipment is training and motivation, as a government, we are doing all that is possible within the limit of our available resources to equip the Army and indeed the Armed Forces of Nigeria to perform its official roles.

In addition to this, all efforts are being made to build our military industrial complex. We are also in talks with friendly nations to equip optimally for efficiency and effectiveness in the various operations that you are undertaking, some of the equipment are now being delivered while others will arrive within the shortest timeframe.

“While performing your constitutional roles, I urge you to remain apolitical and continue to operate within the frameworks of the principles of fundamental human rights.”

In his remarks, the Chief of Army Staff, Lt. Gen. Farouq Yahaya who applauded President Buhari’s unquantifiable support to the Nigerian Army in the quest to create the NA of the future, pledged Nigerian Army’s unalloyed and absolute loyalty and avowed commitment towards the discharge of its responsibility as clearly spelt out in the Constitution.

While acknowledging that the military and indeed the Nigerian Army has witnessed enormous security challenges ranging from increased banditry activities, kidnapping for ransom, as well as Indigenous Peoples of Biafra/Eastern Security Network activities and wanton killings across the 6 geopolitical zones of the country, he posited that despite all these challenges, the Nigerian Army continues to record remarkable successes in the protection of our dear country.

“As it is often said ‘maintaining the peace is more challenging than winning the war’. This assertion has been evident in our series of operations and campaigns to root out terrorism, insurgency, banditry and other violent crimes from our country. The Nigerian Army has continued to remain resolute in bringing the myriads of security challenges to a logical conclusion favourable to the nation.

“We are thus, gathered here today and throughout this week to evaluate and appraise our activities and efforts so far towards achieving the overall objective of better positioning the Nigerian Army to face the tasks ahead in the Year 2022 and beyond.

“Mr. President Sir, the Nigerian Army in the preceding quarters of 2021, faced daunting challenges that made it more robust in achieving its mandate. It is therefore the Nigerian Army’s resolve to continue to discharge its constitutional roles toward ensuring peace and stability in every part of the country. I wish to assure Mr. President and the good people of Nigeria that their Army is ever ready at all times to defend our democracy and the territorial integrity of our nation.

“In fulfilment of this resolve, the Nigerian Army’s performance in the conduct of operations has been greatly sustained and improved and improved based on efficient procurement and induction of military hard and software across the theatres of operations. In the recent past, a substantial number of military wares had been deployed especially for JTF NE Operation HADIN KAI and JTF NW Operation HADARIN DAJI to further enhance the tempo of our operations.”

He also observed that the security situation in the North West and North Central which hitherto was tense due to the increased activities of armed bandits among others is now relatively calm.

According to him, the successes achieved by the NA in its operations could be attributed to constant training. It is in recognition of this essential determinant that the NA placed a high premium on training of personnel.

“Within the year under review, NA has organized several training exercises and courses both within and outside the country for personnel. The NA has also collaborated with foreign countries to support its training effort. So far, a sizeable number of infantry and engineer personnel have been trained on counter terrorism and counter-improvised explosive devices. Currently, we have NA personnel undergoing advanced infantry training being conducted by some of our foreign partners in-country.

“These trainings are aimed at building our capacity to tackle the evolving security challenges in the country.

The dearth of requisite vehicles and weapon platforms to provide the needed support for operations has a negative impact on the morale of troops.

“To this end, I directed the Command Engineering Depot and Nigerian Army Special Vehicle Plant in conjunction with the NAEME and other stakeholders to look inwards and see how best these challenges could be tackled. Consequently, within available resources a total of 10 AFVS, 37 B vehicles and 777 small arms and light weapons as well as 7 x 155mm artillery guns were repaired, refurbished and remodified.

“Importantly, we are delighted to showcase to Mr. President our innovative and inventive products achieved through robust research and development efforts in the drive towards building our military industrial complex. Mr. President Sir, we are indeed honoured and delighted to have you in our midst to unveil the Nigerian-made RPG 7, which is an entirely indigenous production effort from start to finish.”

On his part, Minister of Defence, Major General Bashir Salihi Magashi (rtd.) appreciated President Buhari for his quick intervention in the approval of funds for the immediate/emergency procurement of critical equipment and platforms for the Armed Forces of Nigeria to tackle the spate of insecurity across the country.

Major General Magashi who was represented by a Director in the Ministry, Mr. Sunday Attah however observed that one major concern of the Ministry of Defence is the drive to achieve jointness and unity of effort amongst the 3 Services especially in the conduct of various ongoing operations within the country.

“I must commend the Chief of Defence Staff and the Service Chiefs for putting in place measures to achieve this. However, more synergy is still required to ensure that all operations on the ground reflect that jointness in all ramifications for greater successes.”

While urging the Armed Forces on the need to continue decimating the bandits, terrorists and insurgents within the country, General Magashi maintained that: “the activities of Boko Haram and Islamic State West African Province are being curtailed to the barest minimum in adherence to the Commander-in-Chief’s directives.

“I am confident in the capability of our Armed Forces to decimate these terrorist and this must be achieved soonest.

“Permit me to use this opportunity to commiserate with the Armed Forces and families of those personnel who have paid the supreme price to keep our country safe and to implore the Service Chiefs to ensure that those wounded in action are given the best medical attention possible. I assure you that the Federal Government will continue to support the families of those who lost their lives and the wounded personnel.

“Accordingly, you all must shun every form of politicking in the conduct of your responsibilities and in the aid to civil authorities. Let me boldly state that the military has been the unifying factor of our nation since our independence and it must continue to be apolitical and non-tribal as a professional force.

“At this juncture, permit me once again to appreciate Mr President for his commitment in ensuring that lasting peace and security is restored to our country. I also urge the Chief of Defence Staff and the Service Chiefs not to relent in steering the ship of your various Services. The Armed Forces of Nigeria must retain its credibility in the face of challenges in the battlefields.”