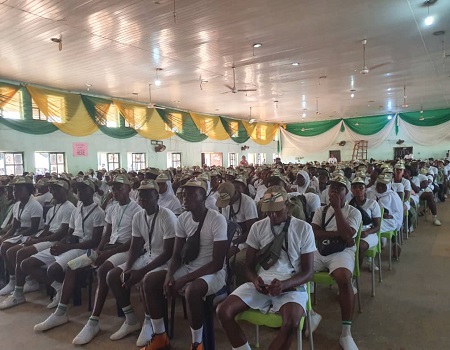 The Independent National Electoral Commission (INEC) has begun preparations for the next year governorship poll in Ekiti state with a sensitization programme for corps members who will be deployed as ad hoc staff for the poll.

The Resident Electoral Commissioner (REC) in the state, Dr Tella Adeniran who visited the NYSC Ekiti state permanent orientation Camp, Ise Orun/Emure-Ekiti at the weekend to address the 2021 Batch ‘B’ Stream 1 corps members said their contributions to success of elections in the country cannot be overemphasized.

Tella commended the NYSC for the Memorandum of Understanding (MoU) with the commission which he said has led to the involvement of corps members in the conduct of elections in Nigeria.

He said, “this has not only added credibility to our elections but also made the exercise seamless.”

He enjoined the corps members to make both NYSC and INEC proud by remaining committed and dedicated to the growth of the nation’s democracy with their participation in elections.

The REC charged the corps members to remain apolitical as the nation relies on them for a free, fair, credible and acceptable governorship election in Ekiti next year.

He assured them that maximum security would be put in place during the next year’s poll for their safety , and the need for corps members to know more about, the conduct of elections in the era of the new normal, which is covid-19 pandemic.

Responding, the state coordinator, Mrs Mary Chikezie appreciated the electoral commissioner for the visit to the orientation camp, saying that the scheme would continue to collaborate with INEC in delivering credible elections in the country.