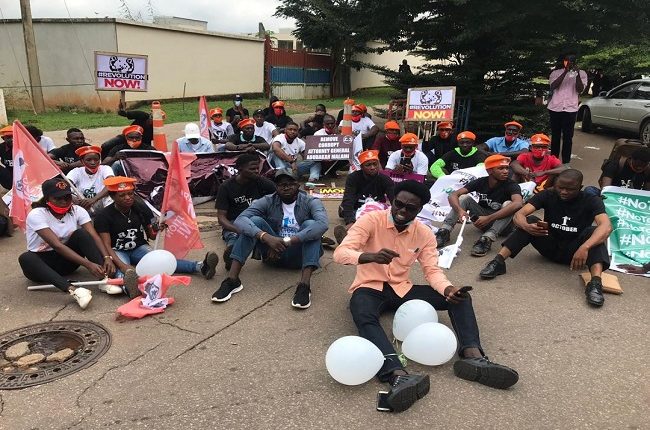 The Centre for Advancement of Civil Liberties and Development has demanded a complete reversal of the hike in fuel pump price and electricity tariff.

This call was made a sequel to a nationwide balloon protest organised by the centre also known as the Centre for Liberty (CFL), a network dedicated to reawakening the citizens and mobilizing them for non-violent citizens’ actions against impunity, injustice, bad policies and bad leadership throughout Nigeria.

According to a statement jointly signed by the co-conveners of the centre, Adebayo Raphael, Ariyo-Dare Atoye and Deji Adeyanju; the group believes that things have gotten really bad for Nigerians economically and that Nigeria’s democracy is being battered and her civic space is shrinking.

“We recall that between March 19, 2020, and now, the price of petrol being sold to ordinary Nigerians has gone from 121.50Naira to 162Naira or more in some places. In the same vein, the tariff for electricity was increased by 100%, taking effect from September 1, 2020, and adding salt to the injury of economic hardship of Nigerians.

“And as if that weren’t enough, the government hurriedly passed a bill that will ensure the disappearance of the Third Sector in Nigeria into law; The Companies and Allied Matters Act (CAMA) 2020, was passed by the National Assembly and became law upon President Buhari’s assent on August 7, 2020.

“These unpleasant developments followed the lingering legislative consideration of the Social Media Bill and Hate Speech Bill seeking to criminalize freedom of expression and punish citizens for freely expressing themselves,” the statements.

ALSO READ: Subscribe to our e-copies by clicking here

The statement read further: “The obnoxious provisions in the CAMA Act that undermines nongovernmental organizations, and also the entire provisions of the social media bill and hate speech bill, are legislations worse than colonial edicts and laws, and they seek to subjugate rightsholders and put them at mercies of the ruling elites.

“No truly independent democratic nation will seek to impose such laws on its citizens, and believe that the occasion of Nigeria’s Independence Anniversary provides an opportunity to the government and the world that Nigerians are Not Yet Independent until we are free of internal subjugation and oppression.”

According to the group, the emergency intervention which it called “NotYetIndependent” focused on mobilizing citizens against the “recent plethora of government’s policies and the impunity and nonchalance for the plight of common people that characterizes those policies.”

It would be recalled that the #NotYetIndependent protests were done in several locations across the six geographical zones in the country, including the FCT, Abuja as protesters took to the streets in places like Yola, Benue, Bauchi, Benin, Auchi, Iseyin, Lagos, among others.

According to the statement, the group said “balloons are often used to celebrate happy moments across the world. Our goal is to create a new and strong sense of awareness through the usage of Balloons for this nationwide protest: that while the rest of the world may be celebrating beautiful occurrences with balloons, Nigerians are in fact lamenting the state of the nation with their own balloons.”

The protesters urged the Federal Government to completely reverse the fuel price hike, electricity tariff increase, and suspend the CAMA Act, just as it urged the Nigerian Senate to kill the Hate Speech and Social Media Bills.