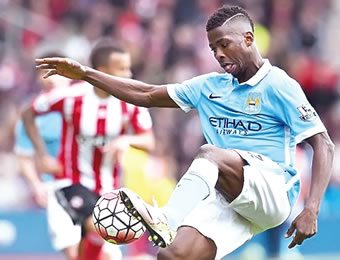 Manchester City manager Pep Guardiola has confirmed that Kelechi Iheanacho will be available for selection against West Ham United tomorrow.

The forward looked to suffer a hamstring injury after going down in pains after attempting to chase a ball through in the Citizen’s 1-0 victory over Steaua Bucuresti in Wednesday’s Champions League play-off.

Having missed Thursday’s drill, Iheanacho returned to Manchester City training on Friday and the Spaniard says the prodigy has no injury scare and will be set for the Hammers.

“No injuries from midweek. Kelechi was almost nothing so it was a scare but he’s fine,” Guardiola told journalists at his pre-match press conference.

“Everybody’s fit and ready – we trained with 30 players today.”

City are in dire need of a win against ninth-placed West Ham United at the Etihad Stadium to remain at the summit of the English topflight.