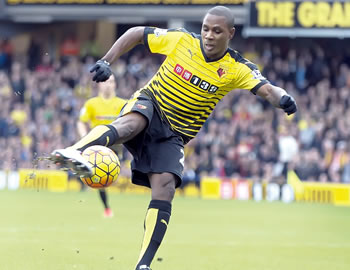 NIGERIAN international, Odion Ighalo, will be looking forward to scoring his first goal this season in the English Premier League when Watford takes on Arsenal today at Vicarage Road.

The Hornets are yet to record a win this season in their past two EPL games, while Ighalo who played in all games had fired blank against Southampton (1-1) and Chelsea (1-2).

Ighalo though scored during the week in the English Football League Cup’s 1-2 loss to visiting Gillingham in a game which dragged to extra time.

The Edo State-born forward became a super substitute when he replaced Adlene Guedioura and put Watford ahead in the 57th minute, but he and his team-mates surrendered the lead to bow to the lower division side following goals from Mark Byrne (82) and Bradley Dack  (102 Minutes).

Ighalo, who finished last season’s as Watford’s highest goal scorer with 15 goals, it will be recalled, scored one of the two goals at the Emirates Stadium which ended Arsenal’s reign as FA champions in March this year.

The former Nigeria’s U-20 captain is likely to play along compatriot, Isaac Success today though coach Walter Mazzarri, is yet to sanction the debut of the latter, who has not been fielded since his £12.5m record move from Spanish club, FC Granada earlier in the summer.

“He (Success) is an important player. He trained on Friday and a decision on if he is ready to play against Arsenal will be made on Saturday,” the Italian manager told reporters in his pre-match conference ahead of today’s clash with the Gunners.

How Will Casinos Operate After COVID-19?

How Are Betting Services in America Affected by COVID-19?

JUST IN: Africa Cup of Nations postponed until 2022