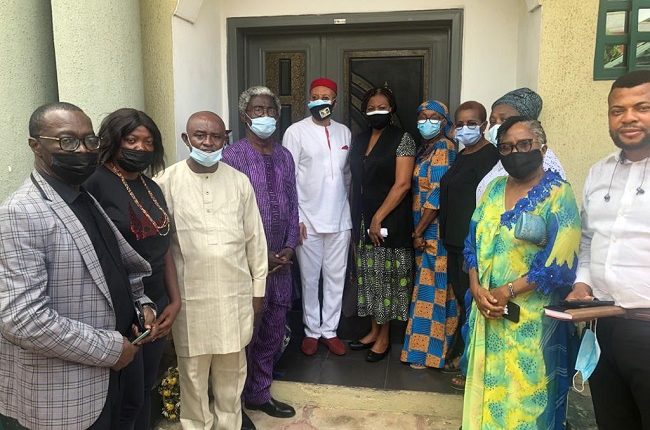 A strong delegation of Igbo and Yoruba leaders led by the Chairman of Board of Trustees of Nzuko Umunna, Prof Pat Utomi and former Minister, Modupe Adesanya Adelaja, on Wednesday, visited the families of Yinka Odumakin and Innocent Chukwuma to commiserate with them on the death of the leading activists.

Speaking during the visit, Prof Utomi noted that Odumakin played a pivotal role as one of the facilitators of the “Handshake Across the Niger” conference, an initiative of Nzuko Umunna which was jointly hosted by Ohanaeze Ndigbo and Afenifere.

He noted that the conference was “instrumental in rekindling the bond of brotherhood between Ndigbo and their Yoruba brethren,” adding that this would go down in history as one of the many laudable contributions of Odumakin to peace-building and national development.

During a similar visit to the family of former Nzuko Umunna member and foremost human rights activist, Mr Innocent Chukwuma, Prof Utomi noted that Chukwuma was a towering figure in Nigeria’s human rights community, adding that his exploits especially during the volatile military era would remain indelible in the annals of Nigeria’s history.

Utomi stated that Chukwuma would be “sorely missed not only by Nzuko Umunna but by all lovers of freedom and development” due to his invaluable contributions as a strategic thinker and activist.

He prayed for the repose of the souls of the departed activists, and that their death would rekindle a national rebirth as a memorial to their struggles and patriotism.

Speaking in the same vein, Mrs Adesanya-Adelaja noted that the death of the activists has revived the spirit of brotherhood and cooperation between the Igbo and Yoruba peoples, adding that this is one of their greatest legacies as nationalists.

The delegation was received by the spouses of the deceased human rights activists, Dr Joe Oke-Odumakin and Mrs Josephine Chukwuma, who thanked the delegates for the honour done to their husbands.