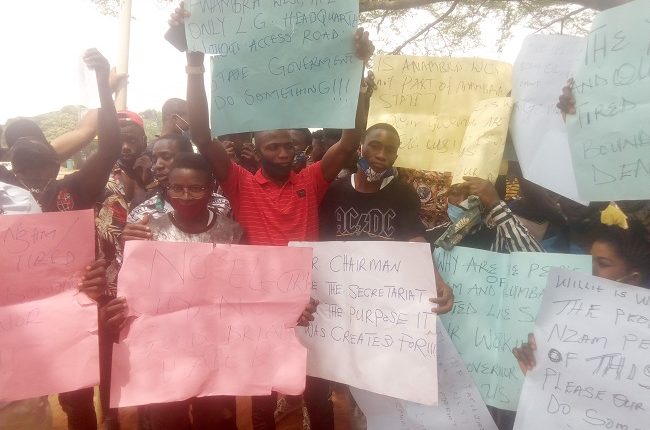 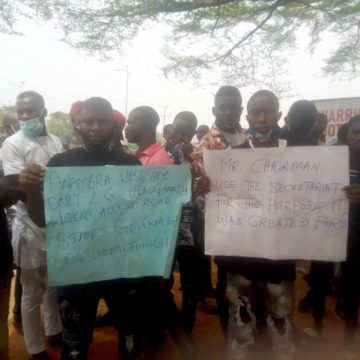 Igala-speaking community, Nzam, the Headquarters of Anambra West Local Government Area of Anambra State, on Monday, held a peaceful protest against what they tagged Abandoned Projects in Nzam Community and ill-treatment by the present administration of Governor Willie Obiano.
The protesters numbering about 380, who were drawn from the community, carried placards bearing various inscriptions such as “Obiano tell the contractor to complete our road, our people are dying, Anambra govt come to our aide, among others.”
They accused the Transition Chairman of Anambra West LGA, Mr Syvester Orji, of putting deaf ears to the people’s ply. And not always be in the office alongside his staff as expected.
They also accused the Anambra State Government of enslaving them in their ancestral land because there are Igala-speaking people.
Addressing some selected journalists shortly after the protest at the government house gate, along Enugu-Onitsha expressway Awka, the President General of the community, Mr Fidelis Nnazu and the Youth Leader, Mr Emmanuel Okafor, said it was unfortunate that the state government had joined in the enslavement of the people with it continuous denial of social amenities to the Agrarian Area.
They listed some of their challenges there want Governor Willie Obiano to intervene in the area to include; the completion of Internally displaced person building that has been abandoned by the contractors seven years ago, Water reticulation project abandoned six years ago, lack of security vehicle in Nzam police station, complete absent of Electricity since the creation of Anambra state in 1991, lack of Medical centre, lack of Judiciary and the Governor intervention on the ongoing Mmiata-Nzam road construction to ensure its completion, so as to ease the transportation system in the covered.
“You journalists should help talk to the government to help us build hospital for our pregnant women and children, because, we do go to Asaba, Delta State and at times Onitsha for medical attention due to lack of hospital and access road to Anambra State capital, Awka.”
The Igala-speaking people appealed to Governor Obiano to passionately intervene in ensuring full usage and utilization of the already government approved and existing Secretariat in Nzam as the Headquarters of Anambra West LGA, by directing the present Chairman and subsequent ones to enable the local people to feel the impact and dividends attributed to the creation of the local government.
In their separate reactions on the development, the Transition Chairman of Anambra West LGA, Mr Silvester Orji and the Lawmaker representing Anambra West State Constituency in the State House of Assembly, Honourable Patrick Udoba, says they have no knowledge of what the people are protesting of.
They accused the opposition of using some selected Youth in the area to tarnished the APGA government, especially now that the State is about to conduct its governorship election.
They denied the allegations that the community has no hospital and road, except Electricity, where they noted that the blackout was a result of the flood that submerged the road and that the work to install Electricity in the area is near completion.
They appeal to the protesters to appreciate the present administration of Governor Willie Obiano’s 20 million naira “choose your project initiative” that has put a smile on the faces of many Youths in the area.
Mr Henry Nwasike, the Public relations officer, the State Ministry of local government and chieftaincy Affairs, who address the protesters on behalf of the government, assure them that the government would do everything possible to ensure that all their demands are made.

The last time Nigeria recorded such a low figure was in the December 27 to January 2 week, when it reported 5,681 cases…Igala-speaking community protests marginalisation in Anambra