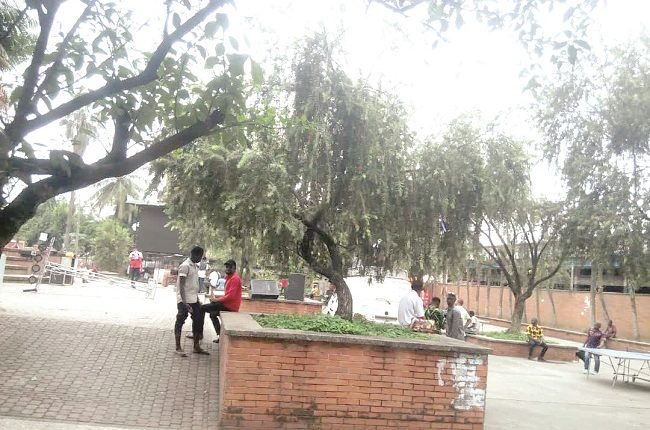 It was designed as a relaxation spot for the general public to stave-off their distressful outlook after the hustle and bustle of the day’s challenges. But the popular Ibom Plaza, in the Uyo metropolis, is fast becoming the shadow of its old self, as successive administrations fail to sustain the serene and attractive ambience etched by Obong Victor Attah, former governor of Akwa Ibom State. INIOBONG EKPONTA reports the sorry state of the expansive facility.

Different horrendous tales abound on the lot that has befallen the Ibom Plaza, a relaxation spot designed by the Obong Victor Attah administration between 1999 and 2007. In an interaction with Nigerian Tribune, a lady, who spoke on the condition of anonymity related how dare-devil criminals who now inhabit the once opulent spot robbed her in broad daylight while passers-by moved on as if nothing was happening.

According to her, “One of your colleagues who helped me to get assistance for surgery on my legs from the office of the First Lady (Martha Udom Emmanuel), dropped me off at the plaza after we left a bank where we went to get some cash. Immediately I alighted, I was trying to cross over to the other side of the road when three fierce-looking guys accosted me and began to label allegations on me. They called me a prostitute, saying I was dating a married man. They said they were going to report me to the wife of that man. They manhandled me and collected all the money that I had. I was left with no dime; I had no money to pay my transport fare back home. That is why I had to run here to complain because people were only looking at me and passing by as though I was the criminal.”

Samuel Akpanobong, another robbery victim at the plaza related how unsafe the terrain had become: “We only came here to meet ourselves and relax out after a hard day’s job, but you must be very conscious of your personal safety and security because you can never tell who is armed; a young boy of 14 can confront you with a rifle in the evening here and dispossess you of your personal belongings.”

During the era of governor Godswill Akpabio (2007-2015), there were attempts to revamp the plaza on the arena that borders Aka Road, Abak Road, Ikot Ekpene Road and part of Oron Road. But Effiong Bassey, a levy collector around the plaza, believed that Akpabio’s efforts were cosmetic.

“What drew Akpabio to the Ibom plaza was to promote Akwa Ibom son, Samuel Peter, who was then in a World Boxing Heavyweight Championship fight. That was the major reason why electricity light was restored to the facility and the big screen television at the centre of the plaza square was replaced to enable people watch Peter humiliate his opponent in his first heavyweight bout, which he won to the delight of Akpabio.

“Since then, the mega arena has become home to lizards and other reptiles due to neglect, while criminal elements take advantage in to reduce it to an abode for kidnappers, armed robbers, thugs, mentally deranged men and women, drug peddlers, women of easy virtue, as well as teenage children labeled as child witches and abandoned by parents, who alleged they are the architect of their misfortune,” he said.

The above represents many other people’s opinions about what the Ibom Plaza has turned out to be in recent times. Checks by Nigerian Tribune corroborated this stance and even revealed more that petty drugs and other stimulants flow freely among visitors for teenage and adult addicts within the facility.

“The plaza that used to be a serene place for everyone, even till the wee hours of the night is fast wearing-off such edifying complexions. What you see now are ugly scenarios where even mentally-deranged people can openly make love without being disturbed even in broad daylight,” Nsikak Idiong, a toll collector at the plaza stated.

He recalled that “it took the soldiers drafted to maintain security around the plaza area and the Uyo City workers in the wake of the EndSARS protest, to disentangle a madman locked in a sex romp with another mentally ill woman on the Ibom plaza circle. Only the intervention of soldiers guarding the plaza saved the madwoman from the stranglehold of the energetic mad man,” Idiong added.

The ugly incident, it was learnt, was later reported to the First Lady, Mrs Emmanuel, who is said to have zero tolerance for rape. A manhunt for the fleeing madman was arranged and he was later apprehended and consigned into a rehabilitation centre operated under the First Lady’s pet project: Family Enhancement and Youth Re-orientation Programme (FEYREP).

Speaking on the strange activities going on in and around the Plaza, Mbakara Stephen, a shop owner within the complex, told the Nigerian Tribune that, “The more worrisome problem about the plaza is that a lot of vices happen there from morning till the wee hours of the night under the watch of the police. Because of the prevalence of crimes within the facility, an emergency police post was erected there, but regrettably, the bunker serving as the detention facility for criminals had become an extortion point where minibus and tricycle operators are forced to pay a sizeable part of their daily earnings to the police, especially at night, for flimsy offences.”

He continued: “They would overlook incidences of rape, open prostitution by adult and teenagers and constant drug abuse by Indian hemp addicts, crack cocaine and other high substances.”

For Obot Michael, a newspaper vendor around the arena, the most worrisome among the vices thriving within the facility is the compelling need to address the challenges of underage children driven away by their parents on the pretext that they are possessed with evil spirits truncating the progress and development of their parents.

“The children between the ages of five and 14 have come to make the plaza their permanent abode. They indulge in virtually all sorts of illegalities including drugs, sex-for-cash and other forms of criminalities”, Michael said. Another respondent, Christiana Okon, a food vendor within the facility, added: “Sometimes, they would come in groups and beg for food and I would dish whatever quantity for them for little or no cash. Some of them would become pregnant, especially the females and after some time, you won’t see them again.”

An investigation by Nigerian Tribune revealed that the unfortunate children labelled as “child witches”, popularly called ‘Skolombo’ in the local parlance, used to congregate at a bush camp around the University of Uyo (UNIUYO) town campus, Ikpa Road. But, it was further gathered that they were soon to become endangered species, as cruel men and desperate politicians, according to a senior security officer at UNIUYO, cashed in on their tenderness and lack of security to reduce their ranks.

“They used to congregate at the university not too far from here down the ravine at night. From there, they would move in droves in the early morning hours to some dumpsites around Ikpa Road here and the mega dumpsite along Uyo Village Road, where they scavenged for food, clothing materials including metals and plastic items for sale”, the UNIUYO source added.

Due to neglect, coupled with the inability of government agencies to effectively regulate social activities in the facility, Hausa\Fulani migrants have turned the arena into their abode, where they sneak out to major traffic light points to solicit alms. The Hausa\Fulani, dislodged from some of their major enclaves in the South-West and parts of South-East, following consistent herders-farmers clashes, have relocated down the South-South, where they form their colonies in some settlements including the Ibom plaza, Nigerian Tribune gathered.

“They (Hausa\Fulani) have formed their colonies here within the plaza, where they push all manners of stimulant to willing patrons. Some engage in shoe mending, polishing and shining, suya and wrapper businesses, while their women would move with kids to major bus stops to solicit for alms in the morning hours”, said Affiong Essien, a mobile phone dealer at the plaza.

“At a point during the height of Governor Emmanuel’s election and re-election periods, the plaza was turned into an arena of the opposition where idle and jobless youths would gather to discuss newspaper reports and deliberate on the good and bad sides of the administration in heated argument.

“At some point, the jobless youths within the plaza would criticise and jeer at the governor’s convoy each time it snaked its way round the Ibom plaza roundabout, heading towards the Ibom International Airport or any official function in the state”, Udousoro Etim, a shop owner at the arena said.

Worried by the problem, the governor, at the first State Executive Council (SEC) meeting in January 2021, announced that his administration had earmarked a whopping N50billion as intervention fund to address infrastructural challenges including the remodeling of the Ibom Plaza ‘to meet international standard’.

The Commissioner for Information and Strategy, Comrade Iniobong Ememobong, who underscored the importance of fixing the facility, said Emmanuel had given the Commissioner of Culture and Tourism, Mr. Orman Esin, the mandate to revamp the facility.

“Proposal for the rehabilitation of the complex has since been submitted to the State Executive Council (SEC), and we are waiting for the go-ahead for work to begin”, Esin said.

Ahead of the major turn-around maintenance of the facility, Esin, was at the complex last month, where he interfaced with a cross section of businessmen and women, just as he intimated them of government plans to give major face-lift to the place.

“He (Esin) was here some weeks back. He gathered some of us here and discussed over some bottles of drinks and other munchies, and intimated us of the government’s plans to reposition this facility. But what we don’t understand is why the government is not providing the alternative converging point for us before drafting contractors and their bulldozers in to drive us away,” Ezeukwu Emmanuel, a shop owner within the facility queried.

“Government should give sufficient notice to relocate if it can’t provide an alternative place for us to move to while the renovation throughout the whole period of renovation work would last,” he added.

In spite of the huge investment in the water sector by the government and international organisations, water scarcity has grown to become a perennial nightmare for residents of Abeokuta, the Ogun State capital. This report x-rays the lives and experiences of residents in getting clean, potable and affordable water amidst the surge of COVID-19 cases in the state…No longer tourists  No longer tourists

The Lagos-Ibadan railway was inaugurated recently for a full paid operation by the Nigerian Railway Corporation after about a year of free test-run. Our reporter joined the train to and fro Lagos from Ibadan and tells his experience in this report…No longer tourists  No longer tourists