Wondrous World of Women
By TAYO GESINDE On Mar 4, 2020 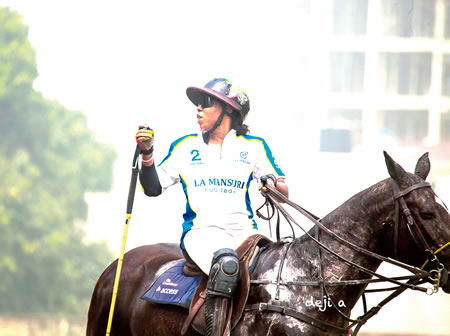 Neku Atawodi-Edun is a Nigerian polo player, equine sports scientist, entrepreneur and philanthropist. In this interview by TAYO GESINDE, she speaks about how she fell in love with polo as a teenager and how that influenced her course of study at the university.

WHAT inspired you to play Polo, instead of any other sport?

While I was in Kaduna, the polo club there was military owned, and my father was in the military so we used to go to the Polo club a lot  and  I just fell in love with the game. It is amazing to see people working with the horses and working with their teammates, and what pushed me to play was everybody telling me I couldn’t play because I was a girl, which only made me want to play more, and when I got to the UK, I studied horses in the University, so when I graduated I started working for polo clubs around the world.

What were the challenges you faced as a lady in the Polo world.

The challenges with polo is not really gender based. It has to do with getting to a new place and finding good horses. For instance,  Antor came in from the UK  last week to play here and we struggled with some of the horses. Some of them weren’t fit, some had gone lame and we just really struggled to get organised and I found out that in Lagos, traffic is a massive hindrance. Some weeks ago, I played for a different team and we had to play two against four people, because two of our players were stuck in traffic due to the work on the Falomo bridge. So here, I find that the biggest challenge is the roadblocks. Also, to organise Polo is really tough and I think for Nigerian Polo,  we need to focus on developing our local horses. If we do,Polo would grow a bit quicker because people can get into the sport without having to ship a horse or clear a horse or fly to Argentina to buy a horse. As a lady, and a Nigerian, I wish there were more women especially now that women polo is the fastest growing segment of Polo in the world. We now have women only polo tournament, which I’ve played a lot of but here, there’s no opportunity for women and I’m hoping to work with the polo association to start to change that. It’s going to take a while but I would love to see so many more women play. Bringing in more female players from other parts of the world to come and play here and we’ll need more female patrons to do that. Also, for new girls coming into the sport as well, it can be a bit discouraging because there will be so many guys around you. So, we need more female players, even with the guys, obviously it’s the horse power but they’re stronger, so you feel more involved when you play with the girls than when you play with the guys.

Knowing that there are very few female Polo players in Nigeria do you have any plan to remedy thatand raise new generation of female players around here?

I only just got back from playing in Argentina and now I want to focus on being back home. I’ve been working one-on-one with lady players, teaching them to ride, but what I really want to do is to work with the association to get the lessons for women subsidised by reducing the entry fees for women as well as to  encourage other guys to have a lady on their team. For instance, when putting together a team, you will get a 50% discount if a woman is playing with you. This would  make them want to go and look for a woman to put on their team. With that, women can start playing and get to higher level very quickly. That is one way to do that. I’m speaking with the Lagos president, Mr Ayo, about giving subsidised lessons

So do you intend to take these plans to the schools?

Yes, actually, I have been invited somewhere to speak to some children. I have a charity that teaches orphans to play polo. So, yes, absolutely, I intend to take it to the schools because there are a lot of parents out there that don’t care about the gender of their children and are looking for activities to put their male or female children into. I think there isn’t a structured way to learn Polo here, like the way we have with the riding school so, it would be amazing to do that with the children, both male and female, and through this also we can get more women in Polo.

How many tournaments can you say you’ve played so far?

I don’t know, but it is a lot. This year alone, I have played in the Argentine Open, I played in Spain, South Africa, in the UK. I think the biggest one this year was Argentina because I became the first black person, man or woman to play in the ‘Open’ and that was an amazing experience for me.

How does it feel to be the first woman …

It makes me feel proud but also a bit sad  because I would love to see more diversity in the sport that I love. I hope that  will encourage more people to get into it.

Do you remember the first polo game that you played?

So how does it feel to be the highest in West Africa?

As a family woman, how have you been able to juggle the two, playing Polo and taking care of the family?

It pays to be blessed with a Polo playing family, my brother-in-law plays Polo, my father-in-law plays polo, my husband used to play Polo so we just merge it into our lifestyle. The horse are part of our family. I’m blessed to be married to a family that understands, if not, it would probably  have been difficult and because we understand, I think it just makes us a stronger team.

How many Horses do you have in your stable?

I have four here, and I have five in Europe.

Divorce on the increase because people get married with wrong mindset, orientation — Bishop Otuya

Why PDP pushed for review of Buhari’s election judgment