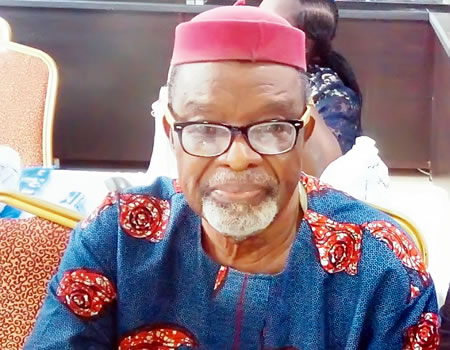 Chief Fabian Adibe is one of Nollywood’s most revered senior thespians and art directors. The Imo State-born actor came into limelight after leading Nigeria to her first Commonwealth Art Festival in London in 1965, he also played the role of Ogbuefi Uzowulu in the movie adaptation of China Achebe’s Things Fall Apart. He was recently rumored to be blind, but in this interview with Newton-Ray Ukwuoma, the veteran actor, who has been featured in over 300 movies, shed light on his sight, career, and marriage among other things. Excerpts:

You are one of the veterans who started acting even before the Nigerian movie industry became commercialised, how did you discover the talent?

They gave us their billboard, so we put up a vacancy for a director.  That was how John Ekwere of ENBC came on board and he became our director. That group became so good; we did a lot of Nigerian and foreign plays that we represented Nigeria at the Commonwealth Art Festival in London in 1965. I would like to thank the British Council for improving the drama culture in Nigeria, particularly in Eastern Nigeria. Because after our performance, they sent people from England to teach us set design, costumeering, lighting, art directing, and they gave us set equipment. I took interest in art directing. That was why in Festac 77, I was the art director for Nigerian Drama for Festac 77. I built the Lambodo set.

But how did the Nollywood part come in for you?

The Nollywood part came in 1993. There was this bold step taken by a marketer to shoot a film which was called ‘Living in Bondage’. That movie took everybody by surprise. We all came to realise that we could do the same thing. So, all those who had money started moving into drama on VHS and of course, they had to sweep me up because I was already into drama. I was already doing drama on Television at the time.

You were in King Jaja of Opobo and in the adaptation of Things Fall Apart by Chinua Achebe. These was before 1993, so what happened?

[Cuts in] Yes, I was in fact the art director and I played Obuefi Uzowulu in the adaptation of Things Fall Apart. It was a production by NTA at that time. After that, other opportunities started coming. I have done more than 300 films.

Can one find the original version of that movie adaptation now in Nigeria?

I can’t say because at that time, the movie was bought over by a group of universities in America. If you find any version of that movie, Things Fall Apart in Nigeria it might be the pirated version.

In terms of story sources, do you think adapting plays and novels written by our first generation authors is a good way of salvaging the poor stories in today’s home movies?

It is true. I would be delighted if our present day movie producers take up the challenge. If I had the means, I would be working on plays and novels by first generation Nigerian authors because these stories were done by intellectuals who knew what they were writing about. Some of the stories we have now, to say the least, are artless. Nollywood has not done anything about Things Fall Apart, they have not done anything about Song of a Goat, there is The Raft, and we have so many of them piling away in the shelves. Instead of going to these publishers to get the right stories, they rather go to hire half-baked writers, who produce shoddy scripts. It is my understanding that the industry is picking up and when it graduates to the level we expect, we will want them to shoot real stories.

In your biography, it says you have done two foreign stories. How did you land the jobs?

Yes, I was in Soweto, a story about the struggle in South Africa, and Mr Johnson, a Hollywood film. I got a call from the producers.

As a revered actor, have you tried to tackle the teething problems in the Nigerian movie industry?

Like I said, we are going up. Once, I asked MultiChoice why they show every movie they are given and they told me something that was really instructive. They told me that they wanted to encourage producers, that when they encourage them they (producers) will make money and with money in their hands, they may want to improve the quality. And I accepted that, so whatever we are seeing now, we should just take it because that was how the movie industries in Britain and America grew. In fact, America started with silent films and look at where they are now? Our movie industry is in a journey and we hope it will compete with other industries in no distant time.

Recently we got wind that you are blind. How is your vision now?

I got attacked by glaucoma, so I have very poor vision. Right now, I am handicapped. I can’t move without help.

How long has it been since you noticed it?

18 years ago I noticed something in my eyes. I felt something burst and retract in my eyes. A doctor told me it was cataract. But after some years, I went to see another doctor, there I was told I had glaucoma.  He started giving me medicine, by this time some damages had been done. It got to a point where the doctor told me that it could not be operated upon.

Have you tried any hospital outside Nigeria?

No. But I am told that it could be operated outside Nigeria, but when I was told the amount of money I needed for the operation, I just continued to use my eye drop.

How much were you told, sir?

Some said 9 million, others 12 million. From where can I source that kind of money?

Have you reached out to anybody in AGN for assistance?

I don’t know if I should be the one to reach out. If we had a working AGN, it should have reached out. If we had leaders who are sincere they would have noticed. I have been to so many places and they see me being led along yet nobody has said anything. It is true that I need help but I should not be allowed to come cap in hand. I leave my fate to God. I thank Him now that I am not yet blind. I still read, but only that the vision is poor.

When was the last time you were featured in a movie?

I did a movie 7 months ago. The marketers I used to work with ran away from me because they did not want to handle someone else’s responsibility, but other private producers come to me. If it is to sit and talk, I can interpret my roles perfectly.

What do you have to say about the resurrection of Igbo movie by Africa Magic some years ago?

Some of our people who wanted the Igbo movies restored got together, someone like Pete Edochie suggested the name and other actors worked with African Magic and it was done.

Are you worried about this present structure in Nollywood?

Of course, I am worried. I have been doing this since 1950. If it succeeds, I will like it. I will be very happy to see Nollywood at the peak where it will be competing with Hollywood in every sense of it including welfare packages for senior actors.

Which movie is your best?

It will be difficult to say. I have done so many movies. I think my role as Ogbuefi  Uzowulu in Things Apart comes to my mind now.  I think because I also doubled as the art director of the film. I worked with Inyang Ema, who was the production designer.

How did you find your wife?

That’s a very good question. I did a production in 1978 at NTV Aba which was to re-enact a Ghanaian play entitled, “The Child Factor”. There was this lady, who played a supporting role. I played the main role. We got together a couple of times and she became my wife.

You married an actress. Does she still act?

No. She stopped acting after our marriage.

Did you stop her?

Why did you leave NTA?

I was retrenched in May 25, 1984. I wouldn’t forget because I was retrenched because our present president who was the military head of state at the time said that the federal government was overstaffed; that they should reduce staff. That was how I was retrenched. The managing director then probably didn’t like my face, included my name in the list.

Have you had a taste of Lebanese spinach soup?

He turned me into a high blood pressure patient ’cos of his jealous, suspicious acts —Woman