How my wife changed my story —Lekan Olatunji 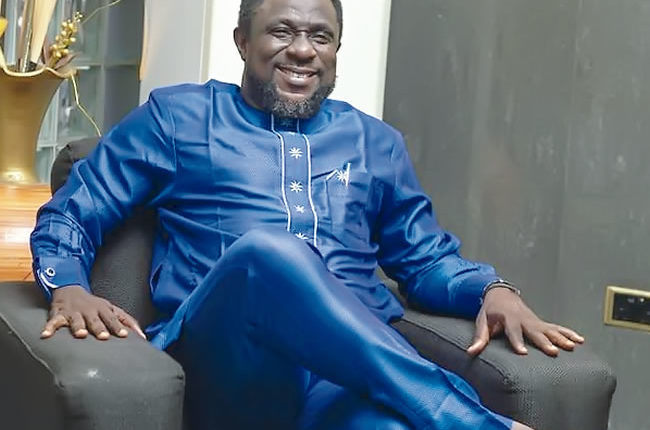 FEMI OGUNTAYO recently met Nollywood actor and movie producer, Lekan Olatunji, who just celebrated his birthday in grand style. In this interview, Lekan talked about, how he rose to the top and some trending topics in the Nigerian movie industry. Excerpts:

You celebrated your birthday recently and it was huge. You were celebrated by your friends and fans worldwide. Reminisce on how you started in the industry; how would you describe the journey so far?

It wasn’t easy at all just like it is in every profession. I was married when I joined the industry; in fact, I was into sales of electronic products before leaving it all because I wanted to join the movie industry, then I met with my boss, Mr Portable (Olu Olowogemo). It wasn’t easy at all. The money I got from selling all my products which I put into my first production didn’t yield any profit. It was frustrating at the beginning and I have a family to fend for. But because of my consistency and my cordial relationship with some movie producers in the industry then, I started getting invitations to feature in movies.

Sometimes, I got two scenes, sometimes three scenes and my wife, parents and some of my friends didn’t like that. This complicated issues. It got to a stage when some of her friends started noticing me on their screens and they told her they saw her husband and all that. Then she started to like what I was doing. So, there was a time I became moody and she asked what happened, then I explained my ordeal at a production I went for then, which I told her was frustrating and that only when one has money for one’s own production that one could really progress fast in this industry.

She smiled and told me she was just looking at me all this while and joked that she hoped it’s not that when she assists me now and I become famous and rich on the job, I will now be feeling too big for her. Then I told her I am not like that and will never forget my family. She then asked me how much I would need for good movie production and I told her. She transferred that money into my account that night and since then, that money has been what has really helped my career grow. All my subsequent productions since then have come from the profits I made from that first major production she helped me with. I returned her money and I have been using the profits for my other productions till now that I get marketers to support my productions and all. So, I thank God, when I look back at all these and how I was celebrated recently, I just give all glory to God.

Apart from your wife, who are those people in the industry who you can say helped you grow and progress speedily in your acting career?

Firstly, I will thank my boss, Olu Olowogemo Harejan, he is not one of those bosses who will not want their trainees to grow or get bigger than them. He really supported my career and he never stopped me from associating with other caucuses in the industry. He will even be the one encouraging you to do that. When I got invited to feature in ‘Arugba’ by Mainframe, I told him about it and he allowed me to go. So, when I came back and I was paid for the project, I gave the money to him and he said it was my money, I shouldn’t bother giving it to him. He introduced me to a caucus where I met with a lot of producers and in this caucus, there is hardly a month we won’t have at least five movie productions and they would make sure I feature in at least three of them. This really helped my career.

This is the caucus where we have the likes of Odunlade Adekola, Segun Ogungbe, Bose Aregbe, Kola Ajeyemi, Tunde Sobayo, Bukola Adeeyo and many more. After that time, I developed a very close relationship with Odunlade Adekola and he made sure I feature in a lot of his movies. When I go for these movie productions, he ensured that I was well-paid and taken care of. This was how I became close to him and a lot of people see us as close pals.

What is new with you? Any new projects or movies you are working on that we don’t know of?

There is a movie I would be shooting very soon entitled: ‘Akutagiri Okurin Ogun’, a political and crime movie, which will be marketed by Cooperate Pictures. On this project, I will be having the likes of Odunlade Adekola, Fathia Balogun, Kola Ajeyemi, Don Richards, Murphy Afolabi and many more.

What are your thoughts on the recent controversies that rocked Nollywood, especially the Yoruba sector of the industry?

When we joined the industry, there was discipline, which is lacking these days. Also, there is no yardstick to measure or control the intake of new trainees who would eventually become movie producers in the industry. When one upcoming actor brings money today, we will produce the movie for him or her. It shouldn’t be so. They are supposed to go through a lot of training before they feature in front of the camera. So, that is why we have many of these controversies happening in the industry. Many of the new ones who are now causing issues don’t know who is who. Probably one of them has become popular on Instagram; he or she will begin to feel important. It will get to a stage that the likes of Oga Dele Odule, Oga Bello will be on the set of a movie and these new upcoming actors will arrive at the same set in their cars and stay in the car until they are called upon to shoot.

Thank God for the president of TAMPAN, Bolaji Amusan, who is now doing all he could to regulate the industry, ensuring that anyone coming into the industry gets a form and an identity card. There was a retreat organised by the TAMPAN Guild of Directors for the Directors in the industry too recently. These are some of the programmes organised to regulate the activities of actors, directors and producers in our industry. We need all these things.

If you had the chance to change anything in the industry, what would you do?

Firstly, I will make sure I change this mentality of speaking more English in a Yoruba movie. It is becoming too much and it’s annoying. If we want to shoot a Yoruba movie let us know we are shooting a Yoruba movie, if we are shooting an English movie, let us know we are shooting an English movie. Take the movie ‘Ayinla’; for instance did they speak English in the movie? Was it not well done? Let us go back to the typical Yoruba movies we shot in those days, movies like ‘Oleku’ and the likes. There are many of our Yoruba proverbs that our children can learn in these movies. That is why even in my home, I have mandated my children to speak Yoruba to me and not English. They need to understand their mother tongue first before any other language.  Another thing is the welfare of our aged actors. We need to ensure there are policies and schemes to take care of their welfare when they are old and not agile to work like before anymore. We can introduce a kind of dues that can be paid into an account annually for this purpose; it will go a long way.

Going by the way social media is being used by celebrities in the industry, would you say it has done more harm than good or it has been misused by the wrong people?

A lot of times it has been abused by some of our colleagues as they most times settle scores on the social media. Issues that ordinarily should be taken to elders in the industry or settled silently will be taken to the social media and before you know it, it will become a big issue. We are supposed to be role models, if we engage in such behaviours online, what are we preaching to our followers and viewers or even people who look up to us? Though social media has its own advantages too as we use it for the promotion of our projects and movies, we need not abuse its usage.

Some words for your fans.

I would say the love they have been showing me all this while, which is why they have been following all my movies and projects, should not stop. Also, parents who have children who will like to become actors or join the industry; should take away the stigma of regarding every actor and actress as bad boys or ‘runs girls’. We have decent actors and actresses in the industry; they shouldn’t discourage their children from joining the industry.