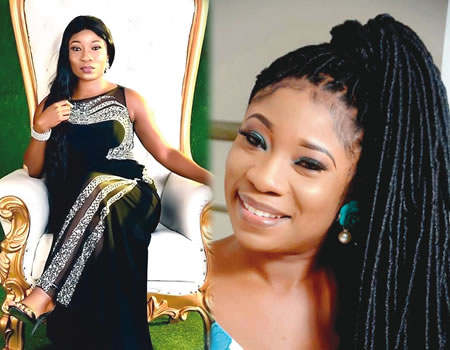 Dolly Nwaduba is a Nigerian writer, actress and producer. She joined the Nigerian movie industry, fondly known as Nollywood, after her education in New York Film Academy in Los Angeles in 2017 and is among the Nigerian students who are using their training abroad to shape the economy. Originally from Aniocha South in Delta State, Miss Nwaduba, shared with Newton-Ray Ukwuoma and few journalists in this interview, how her training and experiences are shaping the way she writes scripts and produces films in Nigeria.

It has been two years since you returned to Nigeria. How has it been for you in Nollywood?

I joined the movie industry professionally exactly when I came back in 2017. This was after my graduation from the New York Film Academy in Los Angeles. And I immediately produced my first movie “Lights Out” and thus began my journey in Nollywood. And it has been pretty awesome since then.

Would like to shed more light on the experience of shooting a movie for the first time in Nigeria?

I must say, it was clearly very different from my experience in Hollywood. I had initially worked for one year in Los Angeles after graduation. Things are done differently here, so I had to learn a whole lot from that first movie I wrote and produced here. Production in Nigeria is easier to achieve, but at the same time more tedious to execute. It’s a bit complicated.

Would you like to state clearly the tedious aspects?

The first for me was the casting. As a writer, I’m very particular about who plays what role in my scripts. Because I had to first learn how to cast actors who would not only fit my character description, but also guarantee a money back project. Second, there was also the “returnee problem” I had because I went to a film school abroad. People just automatically assume you think you’re better than them so they try to openly correct and sometimes even humiliate you for not knowing how they “run things around here “ . They forget you have a whole different experience from what they have. Some even challenged and accused me of going to waste money overseas when I could have just learned the ropes of movie production from under one of the prominent producers/directors for much less. It was crazy.

How did you handle these challenges? For instance, how did you pick your cast?

I usually have particular actors in mind when I’m writing. So, when I am ready to shoot, I contact them.

Were all the actors in your script ready and available when you contacted them?

No. For those that were not available, I found suitable replacements. The industry is actually brimming with lots of creative geniuses. So, there is always someone who was either second best or better. But usually, the trick is to get the one that people love most – if you want to make your money.

Are you working on a new project?

Yes, I’ve written and produced four movies since then. I’m currently working on the fifth one. I just finished one few weeks ago titled “One Wish”. It was directed by Tchidi Chikere and would be out in few days.

What subject matter did One Wish treat?

It’s an unconventional love story that I wrote last year after a very bad breakup.

Yes, I was really depressed and had a lot of really messed up thoughts in my head, but for the fear of going to prison or worse, I had to restrain myself from going to the extreme.  So I did what any writer would do: I poured out my thoughts one page at a time. And being an actor and producer, I got to carrying out my very evil plot of kidnapping my ex on his wedding day without fear of actually going to jail for it. I got the best cast ensemble and the best director to tell this beautiful heartbreaking story of mine.

Are you saying One Wish is a story of your actual intentions about your ex?

Yes, One Wish is my actual love story; well, except for the ending, which would shock everyone.

What led to the break up?

Truthfully, I became a b*tch. It was my very first time actually falling in love with someone other than myself, so it so consumed me that I became possessive to the point of obsession I think. I was constantly snooping around and nagging. He met someone else who started giving him the peace I used to give him when we first started dating. I’m not saying he didn’t have his own faults, he did. But I contributed majorly to the breakup. I literally drove him nuts.

How did you feel seeing him move on?

I felt really bad. The girl was so hot!  I used to stalk her Instagram  page. She’s the perfect slay queen! Whereas I struggle to even put on powder on my face. I felt so bad.

What if he finds out about the movie, don’t you think he would know you are not over him yet?

Well, I really don’t care what he thinks anymore. I’m so over him. But yeah, of course, he’ll know once he sees the movie or this interview.

Well, I, of course, played “Naomi” the heartbroken one. Frederick Leonard played Philip my ex, Diana Okoh played my not so smart best friend who’s ready to kill for me. While Lota Chukwu played one of my best friends who happens to be my only voice of reason ( the sensible one among the trio) and Ada Karl, also known as Ada slim played my no nonsense elder sis who would rain down hell on anyone for her naughty sister who she sometimes avoids as well.

Is this going to be showing up in box office?

No, it’s not a cinema movie. I’m not ready to produce a cinema movie yet. I would be by the end of the year though. It’s all in the works currently.

How do you finance these projects?

Some of my movies I finance myself, and some are financed by private investors. One Wish was executively produced by my friend and record label owner “Philip Samuel “ the CEO of Make Sound From Minds Records (MSFM records). He’s someone who believes in me and wants to see me grow as well as make money too.

So are you currently in a new relationship?

What will your “husband material” be made of?

All I really want in my husband is high intelligence level, at least higher than mine. Kindness, generosity (he must spoil me with gifts oh) and tenacity. I don’t want a man who would easily give up on our marriage at the slightest turbulence. With me, it’s going to be for better for worse you know. Well, hopefully mostly better.

If you had a choice of a vacation spot for two where will it be?

Probably a Vegas or Hawaii or some strange unknown place!The things I want are sometimes so awkward. I hope he feels the same way too, make I no go enter one chance.

How were your parents’ reactions when you decided to go into entertainment industry?

My parents are very supportive of anything I decide to do. They let me make my own decisions and trust my judgment completely.

Were you born with a silver spoon?

I wasn’t born with a silver spoon. I wasn’t spoiled at all. But I always had the basic things I needed to prepare me for a better future especially good education (my aunt and her late husband raised me) and gave me the best of everything they could afford. I was really loved.

Can you recall any fond memories while growing up?

One fun memory I always remember from my childhood was when I ran away from home immediately after writing my WAEC exams. I went to meet one aunty I had in Nasarawa State Polytechnic and I stayed with her for two days without my aunty breathing down my neck to read. I felt free for the first time in my life, but she eventually took me back home on the third day and my aunt gave me the beating of my life. It was worth it though. Yes oh! I was very stubborn.