How Fulani Herdsmen attacked Okada rider with machete, robbed him of his motorcycle in Akure 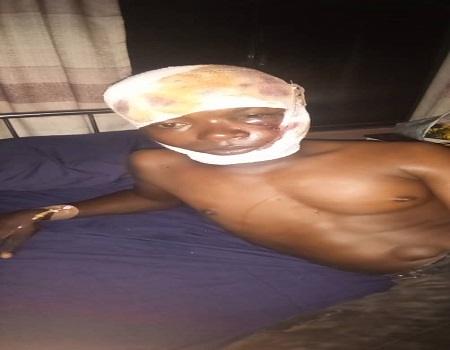 24-year old Daniel James, an indigene of Akwa Ibom State and a resident of Akure cheated death after he was attacked with a machete severally on the head by some suspected Fulani herdsmen along Imafo axis of Akure, the capital city of Ondo State on Thursday.

Daniel, who survives on the daily returns from his Okada business was reported to have picked up some men on his way to Imafo to visit his family. According to him, his attackers also took away his motorcycle and were Fulanis as he could hear them speak fluently in their language and also recognizes one of them very well.

Explaining his ordeal to our source at the police clinic where he is currently receiving treatment in Akure, James said: “I live in Akure, that day I went to Imafo to visit my parents, on my way there, I saw some people on the way who stopped me and asked me to take them to Imafo and return them back, that they wanted to buy something.

“So After buying what they wanted to buy, I returned them back to where I picked them up. It was time for them to pay me and one of them said he only had 50 Naira with him, while the second dipped his hand in his pocket to bring out the money.

“As I turned around to get the money from him, I was hit on the head with a log of wood. I fell in the bush by the roadside and they attacked me severally on the head with a machete like an animal and rook away my motorcycle, hoping that I had lost consciousness and would die, but thank God, and for the good Samaritan who brought me to the police clinic here in Akure, if not, I would have died.

He, however, pleaded that he needed help to recover his stolen motorcycle back, as he got it on instalment and haven’t paid back the balance. He also called on compassionate citizens to come to his aid as he needed to foot the medical bill and needed more medical attention.

Every attempt to get the position of the Police Command in Akure, Ondo State on this matter, as at the time of filing this report, proved abortive.