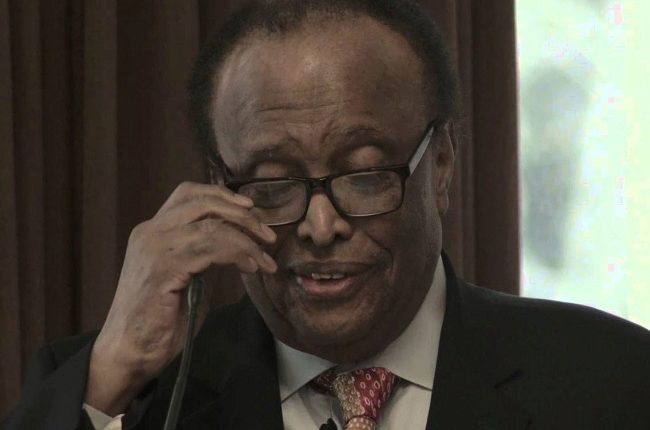 A Nigerian human rights lawyer and member of the Nigerian House of Representatives in the 8th Assembly, Hon. Kayode Oladele has described the former United States of America’s Ambassador to Nigeria, late Dr Walter Carrington as a great Pan-Africanist and warrior who contributed immensely to pro-democracy struggle in Nigeria during the Abacha years.

Hon. Oladele stated this while paying tribute to Dr Carrington via a statement obtained by Tribune Online, also applauded him for the provision of capacity building resources at the U.S Embassy available to Nigerian Parliament through the United States Information Service (USIS) as well as externalization of pro-democracy and human rights struggle against the military junta.

According to Hon. Oladele, “Walter Carrington became the U.S Ambassador to Nigeria at a time when Nigeria was enmeshed in civil unrest as a result of the nullification of the June 12, 1993, Presidential election won by late Chief M.K.O Abiola; an election that was adjudged by the international community as the most democratic in the history of Nigeria.

“It was also a time Nigerians were battling with one of the most repressive regimes ever, both in terms of human rights violation and notoriety for drug trafficking.

“When Dr Carrington arrived in Nigeria, he had a choice; to either fight on the side of the people orally with the military junta. Providentially, as an intellectual Pan-Africanist, the late Dr Carrington knew the task ahead of him well before he embarked on the historic U.S mission to Nigeria and he was well prepared for the eventual collision he had with the military dictatorship.

“Thus, he identified with marginalized Nigerians and chose the path of democracy, human rights and justice.

He collaborated with pro-democracy activists and NADECO and assisted immeasurably in adding international voice to the country’s pro-democracy and human rights struggle which on many occasions, put him on a collision course with the State Security Operatives and caused chilling relationship with the military dictatorship who often accused him of using his ambassadorial position to pursue his personal pro-democracy agenda capable of creating diplomatic row between Nigeria and the United States.”

Stating further, Oladele said that “Dr Carrington was one of the architects of modern democracy in Nigeria as he made very laudable and valuable contributions to the democracy we enjoy today even at the expense of his life. At that time also, some of us, the young activists who were close to him, saw in him, a father figure, a mentor and not just a true pan-Nigerian but a great pan-Africanist.

Hon. Oladele also recalls what he called, one of Dr Carrington’s remarkable moments in Nigeria, an event which according to him, Carrington himself referred to as ‘the most surrealistic experience’ he ever had in his life.

“Paradoxically this happened during the farewell reception which NADECO and other Pro-Democracy Organizations in Nigeria organized for him.

“Just as we were about to start the reception at Pa Onsanya’s house at Surulere, several heavily armed Policemen cordoned off the area and prevented us from holding the reception.

“Minutes later, the armed Policemen located the new venue, burst into the compound and ordered Dr Carrington and several other members of the diplomatic community to leave at once failing which they would shoot everybody.

“We could hear the senior Police officer that led the operation saying very boisterously on his hand-held radio device that they had located the new reception venue and that Dr Walter Carrington and his people were there, assuring whoever he was talking to (presumably at Force Headquarters, Abuja) that his men would soon break up the reception.

“They forcefully chased everybody out of the reception and took over the private residence of Chief Adebanjo until they made sure that nobody was left in the compound.

“The incident created major news around the world the next day and as expected, further exacerbated the cold relationship that existed then between the US and the military junta in Nigeria led by late Gen. Sani Abacha. Such was the turbulent farewell reception we had for Dr Walter Carrington in Nigeria despite his contributions and defined roles in our quest for rule of law, human rights and democracy”.

Hon. Oladele said: “despite the fact that Dr Carrington lived a long fulfilling life, achieved maximum success in his chosen career and died months after the celebration of his ninth decade on earth, the world will still miss in him, a highly perceptive African intellectual, a committed civil rights leader, a champion of democracy and human rights, a patriotic American, a brave African warrior and a great Pan-Africanist.”
NIGERIAN TRIBUNE

I see no hope for Nigeria ― Opadokun