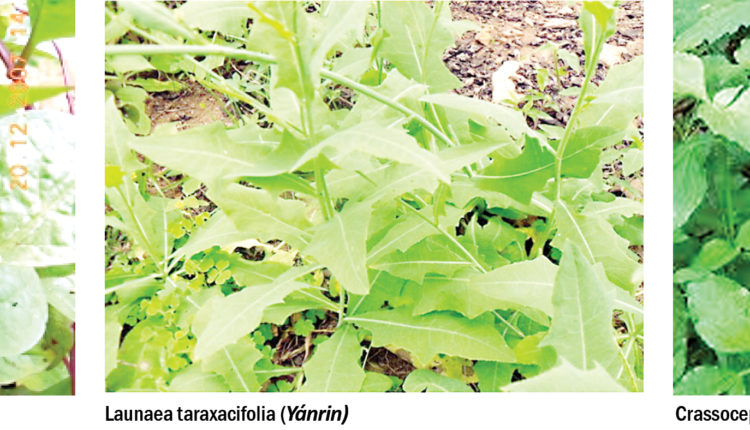 UNDERUTILISED indigenous vegetables are naturally growing wild plant, rarely cultivated and have served as a basis of nutritional livelihood in the rural areas for several years. In spite of the abundance of underutilised leafy vegetables, scientists say increased consumption of these vegetables comes useful, especially in the prevention of heart disease.

The general belief of the preventive and beneficial effect of vegetable consumption on cardiovascular diseases requires scientific investigation. Cardiovascular disease (CVD) still remains the leading cause of deaths worldwide and will continue to dominate mortality trends in the future.

A rising trend in heart diseases such as myocardial infarction or heart attack has been attributed to lower or non-consumption of vegetables in most developing countries, especially amongst urban elite. A heart attack usually occurs when a blood clot blocks blood flow to the heart. Without blood, tissue loses oxygen and dies.

In this study, the researchers studied the beneficial effect of consuming five wild edible vegetables on the functioning of the heart in male Wistar rats following administration of isoproterenol to induce myocardial infarction.

Most of these wild vegetables are edible and have served as a basis of nutritional livelihood in the rural areas for several years. In spite of the abundance of underutilised leafy vegetables, scientists have not fully explored their potential, especially in the prevention of heart disease.

The researchers fed extract from the dried ground leaves to rats under laboratory conditions. Rats (150-200 g) were randomly divided into 14 groups of six rats each. Groups 1 and 8 served as normal and isoproterenol controls respectively. It was in the 2018 edition of the University of Lagos Journal of Basic Medical Sciences.

Groups two to six received 200 mg/kg body weight of each extract, Groups nine to 14 were pretreated with each extract (200 mg/kg b.wt.) and then isoproterenol to induce a heart attack. Vegetable extracts were administered for 28 days. Blood pressure was measured.

They reported that feeding the isoproterenol treated rats with the vegetables singly or in combination significantly reduced the blood pressure and restored it towards normal, affirming the efficacy of these vegetables in preventing high blood pressure, one of the most important risk factors for cardiovascular disease and therefore improving heart health.

In addition, plasma C-reactive protein (CRP), the diagnostic marker of heart attack was significantly reduced in singly and combined vegetable pre-treated groups, suggesting that the extracts retard or prevent the exacerbation of cardiac tissue damage in ISO-induced MI or ameliorate the deleterious effect of MI on the heart.

They declared: “The fact that the lowest level of CRP was recorded in the mixture group suggests additive and synergistic effects of the vegetable mixture. These effects could be attributed to the antioxidant efficacy of the extracts as it has been reported that these vegetables are very rich in natural antioxidants.”

Howbeit, studies have shown for years the importance of healthy ways to cook veggies and boost nutrition. To preserve water-soluble vitamins and minerals, wait to wash until right before cutting. Also, cooking vegetables whole preserves the water-soluble vitamins and nutrients. Likewise, avoid soaking vegetables, as that can remove key nutrients, such as vitamin C, B1 and folate.

What is the best way to cook vegetables to maximise their nutritional value? While methods like steaming are better than boiling, the answer depends on the vegetable. Certainly, that’s not likely to be raw. Studies show the process of cooking actually breaks down tough outer layers and cellular structure of many vegetables, making it easier for the body to absorb their nutrients.

As a general rule, keep cooking time, temperature and the amount of liquid to a minimum when cooking vegetables. That is why steaming is one of the best ways to maximise nutrients. But boiling ends up on the bottom of the vegetable nutritional preparation methods because studies have shown for years the process leaches nutrients into the water.

But what is the rule without exceptions? In this case, it’s carrots. Another study showed both boiling and steaming increased levels of beta carotene. But carrots are better cooked whole; cutting them can reduce nutrients by 25 per cent.