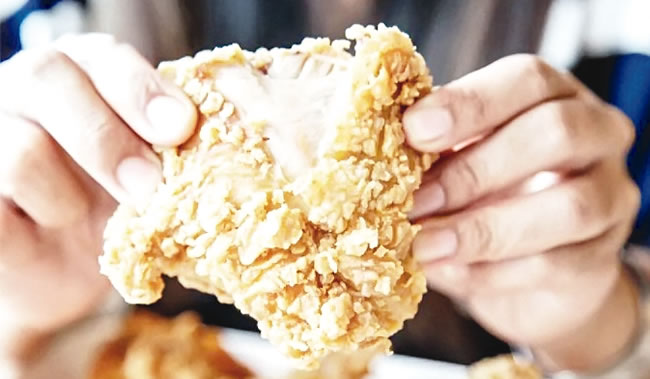 Eating fried food is linked to an increased risk of cardiovascular events.

The risk increases with each additional 4-ounce weekly serving.

A recent meta-analysis has found that eating fried foods is linked with a heightened risk of major cardiovascular events, including heart attacks and strokes.

The analysis looked at the results of 19 studies, 17 of which concerned major cardiovascular events, and 6 of which investigated all forms of mortality.

The authors found that the risk rises with each additional weekly serving weighing 4 oz (114 grams). The results of the analysis appear in the journal Heart.

Generally, the Western diet is high in processed meats, saturated fats, refined sugars, and carbohydrates, and low in fruits, vegetables, whole grains, and seafood. This type of diet is considered a risk factor for obesity and type 2 diabetes.

In their meta-analysis, the researchers looked specifically at fried foods, which are prevalent in the Western diet, and how these foods impact cardiovascular health.

The effects of frying

Foods coated in flour and fried are often high in calories. And, as the researchers point out, they taste good, which makes overeating a temptation.

In addition, the researchers point out, frying boosts the production of chemical byproducts, which can affect the body’s inflammatory response.

However, investigations into the links between fried food and cardiovascular disease and mortality had not yielded consistent results, the authors of the present analysis observed.

As a result, they set out to provide definitive evidence that doctors could use when giving dietary advice.

They also gathered data from six studies, involving 754,873 participants and 85,906 deaths, to look for associations between fried food and mortality.

The meta-analysis also found that each additional 4-oz weekly serving of fried food increased the risk of heart failure by 12%, heart attacks and strokes by 3%, and heart disease by 2%.

The team identified no association between fried food and death from cardiovascular disease or any cause. However, this may reflect the inconsistency of previous findings and the limited amount of evidence. The authors believe that future researchers might find an association if they follow participants for longer periods.

Prof. Riyaz Patel, a professor of cardiology and consultant cardiologist at University College London, in the United Kingdom, who was not involved in the study, says the results fit with our current understanding of biology: “We know that frying food can degrade its nutritional value, generate trans fats, which are known to be harmful, as well as increasing the calorie content of the food, all of which eventually lead to processes that can cause heart disease.”

I want to put on weight

Akure pact with MACBAN not binding on us —Bayari, Fulani group leader

COVID-19 vaccine: What individuals with diabetes, heart conditions should expect…