He was sleeping, I crept into his room and landed my cutlass on his neck —22-year-old Babalawo 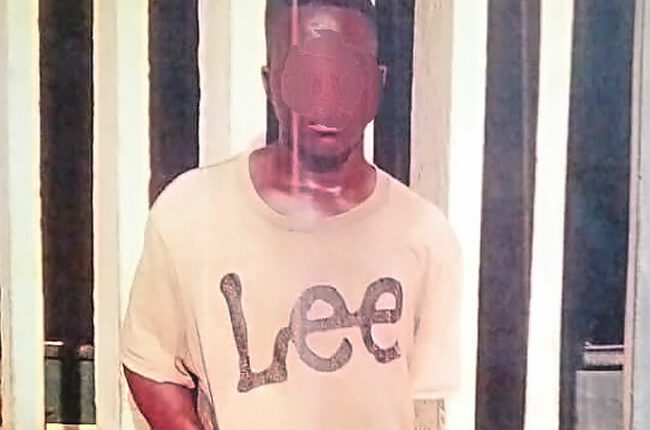 He crept into victim’s room at almost midnight. The man was asleep, naked, lying on his stomach. The suspect landed his cutlass on his neck. Rudely woken up from sleep in pain, he feebly tried to get up. The suspect climbed on him and pinned him down with a pillow, face down, until he went limp. Then the suspect collected his blood in a white plastic cup to prepare money-making charms.

This was part of the confession of Idowu Talabi, a 22-year-old native doctor, who was arrested by the Ogun State police command for killing Isau Oluwatobiloba, a tenant in his grandfather’s house where he was also living.

Talabi after killing the man took blood from the neck of his victim and went back to his room to mix it with herbs and concoctions, ready for sale as money making charm to prospective clients.

Talabi was arrested last Sunday by detectives in Ikenne division of the state police command, after the 30-year-old deceased’s wife told the police that she just returned from a church vigil only to meet the lifeless body of her husband on his bed, with blood flowing from his neck at their residence at 4, Bestway Moro Street, Ikenne, having been inflicted with machete cuts by an unknown person.

The Police Public Relations Officer, SP Abimbola Oyeyemi, who confirmed the story, said that the Divisional Police Officer, CSP Ibrahim Ningi, led his detectives to the scene, where it was discovered that the deceased was killed while sleeping on his bed.

The PPRO stated further that it was also noticed that there was no break-in at the scene and nothing was removed from the room.

SP Oyeyemi added that this pointed to the fact that the killing was carried out by an insider, which made all the occupants of the house to be taken to the station for interrogation.

“After a thorough investigation, Idowu Talabi, who claimed to be a native doctor, confessed to being the person who killed the deceased. When asked the reason for the dastardly act, the suspect alleged that the deceased was fond of accusing him of stealing, and that was what got him to kill the man when he discovered that the deceased was alone at home, sleeping,” the police spokesman said.

The detectives also recovered the cutlass the suspect used in  committing the crime.

In an interview, Talabi told Saturday Tribune: “I’m a native doctor. I learnt it from a Baba. My father and mother are separated. My father left six children with my mother when we were young. I live in my maternal grandfather’s house. It was my mother who sent me to school but I stopped at JSS3 when I noticed that I was not brilliant.

“I went to train as a native doctor  (babalawo), though my family practise Christianity. This was because my mother and I went on a spiritual inquiry to check my destiny (akosedaye) and were told that I was destined to become a Babalawo.

“After a six-year training, I started practising divination and attending to clients. I used to make soaps for them to aid sales (ose itaja), to obtain mercy from people (ose aanu) and for spiritual covering (asiri bibo). I used different herbs mixed with soap. I used to collect between N5,000 and N10,000 as charges.”

Why I was arrested

“Last Saturday, a tenant, Oluwatobi, returned from his shop at about 11pm. He ate, took his bath and entered his room. By then, his wife had gone to church vigil with their only child. He didn’t lock his door but pulled the mosquito net door and secured it. After that, he laid naked on his stomach on his bed and slept.

“I was living at the boys’ quarters but crept in through the back door into the passage of the ground floor of the main building where Oluwatobi had his room. Only the front door was locked, with the back one left open. There was no light; I used my phone’s torch.

“I used a knife to cut the net so that I could reach the lock. I opened it, and used the cutlass I brought to cut his neck. The injury and pain woke him from sleep but before he could raise his head and struggle, I mounted him from the back and used his pillow to pin him to the bed to suffocate him. He struggled till he went limp.

“When I noticed he was dead, I used the cutlass on his neck again to bring out more blood. I went out, found a white plastic cup and used it to collect some blood from the spot of injury. I locked his door with his padlock from outside and threw the key away.

“I went to my room and mixed the blood with a concoction called ‘ebu.’ My intention was to sell to my clients who would need money-making charms.”

How my deed was discovered

“When his wife returned from church, she opened the door with her key to the padlock, thinking that her husband also went to the church and was yet to arrive home. But when she got in, she beheld her husband’s body on the bed with blood. She saw that he was dead and screamed. Everyone came out, including me. She held my shirt and accused me of killing her husband. I didn’t say anything.

“People around told her to leave my shirt and go to police station to report. The police came with her and saw her husband’s body. They took the corpse to the mortuary, then returned to pick all males living in the house.

“We were taken to the police station and interrogated. Initially, I denied being the killer but later confessed.”

Why I killed the victim

“He used to accuse me of being responsible anytime his money was stolen from his room. And I was not the one doing it.

“However, that was not the only reason for killing him. I thought of making money from my clients by preparing a money-making charm (Osole) for them, using human blood. I was expecting to make sales from those who would demand for such.”

Admitting that his act went against the law, as well as societal norms and traditions, Talabi pleaded for mercy.

“I have never killed before. And I’m not on drugs. I was only taking beer, and I drank six bottles that day. My mother has a beer parlour, so I went there to take three bottles that night. I went home and bought three other bottles which I also drank.

“I know that the law says anyone that kills should be killed, but I didn’t give it a thought. I want the federal government to help me and have mercy on me. I won’t ever do such a thing again,” Talabi pleaded.

The state Commissioner of Police, Lanre Bankole, has ordered the immediate transfer of the suspect to the Homicide section of the State Criminal Investigation Department for further investigation and subsequent prosecution.